Ghent Altarpiece restored: a visit to the largest ever Van Eyck exhibition 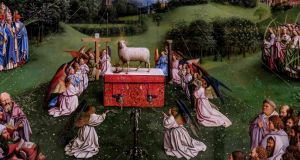 Central tableau of the 15th-century Ghent Altarpiece by Van Eyck – a panel known as the Adoration of the Mystic Lamb – after a three-year restoration. Photograph: Dirk Waem/Belga /AFP via Getty

Blood flows from a bullet-sized hole in the chest of the Mystic Lamb into the Holy Grail. Some of the red liquid splatters on to the white altarcloth. With such a wound, the lamb ought to be agonising, but he stands squarely on all fours, staring quizzically at the viewer, light radiating from behind his head, the embodiment of resurrection.

Jan Van Eyck completed the Ghent Altarpiece, also known as the Adoration of the Mystic Lamb, in 1432. A major restoration of the monumental 5.2m by 3.75m painting, comprised of 20 panels, began in 2012 and is now two-thirds complete.

On January 24th, the bottom, central panel, the focal point of the altarpiece featuring the lamb, was returned to St Bavo’s Cathedral with pomp, ceremony – and some controversy. The restoration has prompted the city of Ghent to proclaim 2020 its “OMG Van Eyck was here!” year.

The nearby Museum of Fine Arts has organised the largest ever exhibition of Van Eyck’s work, including 13 of the Flemish master’s 23 surviving paintings, plus 10 panels from the altarpiece. The exhibition provides a rare opportunity to view these panels at close range, without the encumbrance of the protective plexiglas box in St Bavo’s.

Frederica Van Dam, a curator of the exhibition, first saw the Ghent Altarpiece in St Bavo’s when she was eight-years-old. “I was overwhelmed, awestruck,” she recalls. “We all grew up with the Ghent Altarpiece. It is the Mona Lisa of Belgium, our greatest cultural treasure.”

Van Dam hopes the exhibition she spent three years preparing will confirm Van Eyck’s reputation as a genius, a Renaissance man on a par with Leonardo da Vinci.

The restoration of the Mystic Lamb created a sensation on social media because the creature’s former docile visage, which was the result of over-painting in the 16th century, has been transformed into what Smithsonian Magazine called an “alarmingly humanoid face”.

“People are shocked because the lamb is not an innocent lamb anymore,” says Van Dam. Restorers used scalpels and solvents to reveal the lamb as Van Eyck painted him. “It has a conscience. It knows it will be sacrificed for the sins of mankind,” Van Dam explains.

In the painting the altar stands in a verdant meadow studded with groves and wildflowers. An adoring multitude converge from all directions: kneeling angels, fathers of the Church and knights of Christ, Old Testament prophets, martyred virgins, hermits and pilgrims. The upper panels feature Adam and Eve, angels singing and playing instruments, the Virgin reading her breviary, the deity and St John the Baptist.

The Virgin, God and John the Baptist are dressed like royalty, in sumptuous robes edged with jewels. Philip the Good, Duke of Burgundy and Van Eyck’s protector, possessed numerous Byzantine icons, which doubtless influenced the painter.

The bottom left panel of the altarpiece, showing the Righteous Judges, is a 20th-century copy, and a reminder of the work’s reputation as the most stolen artwork in history. Parts of the altarpiece have been stolen seven times, including panels taken by Napoleon’s troops to the Louvre, and by the Germans in the first and second World Wars.

In 1934, two panels, showing the Righteous Judges, and a painting of a statue of St John the Baptist were stolen from St Bavo’s. The thief returned St John via left luggage at the railway station, while communications about the missing panel ended with the death by heart attack of a stockbroker who had sent ransom notes.

The stolen panel has captured many an imagination. In Camus’s novel The Fall, a “penitent judge” on the run from his own conscience hides the Van Eyck panel in a cupboard. The name of Karel Mortier, a former chief of the Ghent police who devoted many years to the search, is known to every Belgian. A detective remains in charge of the case to this day.

Van Eyck was the pioneer of the northern Renaissance. Although he did not invent oil paint, he perfected its use by adding drying agents, at a time when Florentine painters still used egg tempera. The move to oils signified unprecedented translucence, richness of colour, texture and depth.

He was the first northerner to abandon the rigid, medieval, gold-leaf Gothic style. Sitters in his full-on portraits confront our gaze, or are seen from a three-quarter angle. In the same period, Italian portraits showed sitters only in side profile.

Van Eyck endowed his subjects with human thoughts, expressions and imperfections. Eve’s disquiet is palpable. At close range, individual hairs on Adam’s arms and legs are visible. The face of Joos Vijd, the donor of the altarpiece, is shown with warts, wrinkles and veins. The choir of angels is rendered so realistically that one can almost hear them singing.

Philip the Good entrusted diplomatic missions to Van Eyck, including a trip to the Iberian peninsula to organise Philip’s marriage to Isabella of Portugal. Baudoin de Lannoy was Van Eyck’s travelling companion on that journey. Before it was restored for this exhibition, Lannoy’s portrait, from the Gemaldegalerie in Berlin, “was like a brown patch, with little detail,” says Van Dam. “Now you can see his fur hat and collar, and that he is wearing a purple velvet garment. Records show he was given the purple garment by the duke. The pieces of the puzzle are coming together.”

Jan de Leew, whose portrait was loaned by the Kunsthistorisches Museum in Vienna, was a goldsmith and friend of Van Eyck’s. He resembles one of Van Dam’s colleagues. I was struck by the resemblance between Portrait of a Man with a Blue Chaperon, on loan from the Romanian national museum, and Irish writer Colum McCann.

Four centuries before the invention of the camera, Van Eyck achieved something approaching photographic realism. A perfectionist, he often used single-hair brushes to paint microscopic detail, for example the reflection of a church interior in the gemstone on the broach of the angel Gabriel in The Annunciation from the National Gallery of Art in Washington.

Van Eyck creates an almost tactile sense of the softness of fur and velvet, the cold sheen of copper and silver, the uneven surface of tiled floors, the woof and warp of tapestries and Persian carpets. His hyper-realism would inspire Caravaggio a century later, and Rembrandt, 200 years later.

The ancients argued over whether painting or sculpture was the highest form of art. This “paragone debate” was revived in the Renaissance. Standing before Van Eyck’s grey and white grisaille paintings of St John the Baptist and St John the Evangelist, from the Ghent Altarpiece, Van Dam says Van Eyck expressed his response in paint. “For him, painting was the highest artistic discipline. He’s saying, ‘Look what I can do. With paint, I can give you the illusion that you are looking at sculpture’.”

Van Eyck was the first northern artist to sign his paintings, and the first to have a motto. Als Ich Can, meaning “as I can” or “the best I am capable of” appears on frame of the Madonna at the Fountain, two versions of which are in the exhibtion. He also painted it on the Arnolfini Marriage, which was plundered by the British during the Napoleonic wars, and which never leaves the National Gallery in London.

The motto may have been false modesty, for Van Eyck knew his worth. When he demanded a pay rise, from 100 to 360 pounds a year, Philip the Good told auditors in Lille that Van Eyck’s departure “would be an irreparable loss”.

Like the symbolism in his painting, Van Eyck’s life is shrouded in mystery. We don’t know where he was born, or when, though it was probably around 1390. We don’t know who trained him to paint, or how he learned Greek, Hebrew and Latin.

We do know that his older brother, Hubert, received the commission for the Ghent Altarpiece, but died in 1426 leaving the masterpiece to be completed by Jan. None of Hubert’s work has survived, so art historians find it impossible to say how much of the altarpiece he painted. Most of it is believed to have been done by Jan. Van Eyck died in 1441 and his remains were lost when the church where he was buried was demolished.

Restored panels in the exhibition in the Fine Arts Museum show Joos Vijd and Elisabeth Borluut, prominent citizens of Ghent who commissioned the altarpiece. In removing layers of dirt and varnish, restorers revealed the pleating in Elisabeth’s mauve dress, and the cobwebs which Van Eyck painted in the corner behind Joos to give the painting depth and realism.

Nearly 600 years later, these early patrons enjoy a form of immortality. “We owe the altarpiece not just to Hubert and Jan Van Eyck,” Van Dam says. “It exists today because Joos and Elisabeth had the idea, and paid for it. They had no children, and they wanted to leave something to posterity.”

My Dark Vanessa: A sharp debut that will cause a stir
9