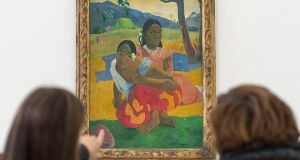 ‘Nafea Faa Ipoipo’ (When Will You Marry?) is said to have been sold to a museum in Qatar for €265 million. Photograph: EPA

A painting by French artist Paul Gauguin has become the most expensive art work ever sold after it was bought for close to US$300 million (€265 million), according to reports.

Nafea Faa Ipoipo (When Will You Marry?) is said to have been sold to a museum in Qatar.

The work depicting two Tahitian girls was painted in 1892.

Its sale was confirmed by former owner Rudolf Staechelin, a collector from Basel in Switzerland, according to the New York Times.

He told the newspaper: “The real question is why only now? It’s mainly because we got a good offer.”

Mr Staechelin declined to reveal the identity of the buyer or confirm the price. Suggestions that the painting was secured by Qatar have not been confirmed by officials in the state.

If reports of the price tag are accurate it would mean the sale exceeds the previous record of $259 million (€228m) believed to have been spent on a painting by Paul Cezanne in 2011.

Qatari buyers were also said to have been behind that purchase.

Other lucrative art sales include Francis Bacon’s Three Studies Of Lucian Freud, which fetched almost $90million (€79m) in 2013, eclipsing the $74 million (€65m) paid for Edvard Munch’s The Scream in 2012.

Post-impressionist Gauguin went on to influence artists such as Pablo Picasso and Henri Matisse but his reputation was only made after his death, aged 54, in 1903.