Plus, David Godbold’s sarcasm continues to divide; and David Claerbout is never less than watchable 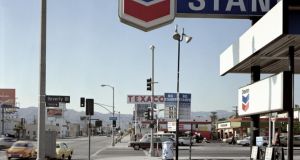 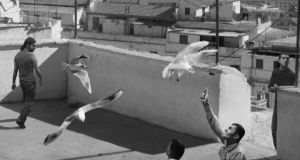 One day in June 1975, Stephen Shore made a colour photograph of a Chevron gas station at an intersection of Beverly Boulevard and La Brea Avenue in Los Angeles. It is an utterly normal, everyday scene.

Despite its casual appearance, however, it is also impeccably composed and classically balanced. Shore, using a large-format camera, was in the midst of a project of several years’ duration. On a series of road trips through the US, he photographed the workaday urban landscape, making visible a world that was virtually invisible because of its sheer familiarity. Selected photographs from his journeys were eventually published in book form as Uncommon Places.

The book, its subject matter and his approach to it marked a pivotal moment in contemporary photographic history. Art photography was usually in black and white and steered clear of banal subject matter.

But Shore was not a lone voice in the wilderness. Earlier in 1975 William Jenkins had curated an extraordinary exhibition, The New Topographics: Photographs of a Man-Altered Landscape in New York. Shore was included, along with a diverse group of photographers whom Jenkins identified as exemplifying a distinct strand in photographic practice: Bernd and Hilla Becher, Robert Adams, Lewis Baltz and others.

As Jenkins pointed out, all of them eschewed style in the conventional sense of the term and addressed aspects of the world outside the fine-art pale. He pointed to Ed Ruscha as a relevant artistic influence.

Last year publisher Markus Schaden established the Photobook Museum in a temporary premises in Cologne. Schaden has been described as a “photobook evangelist”. He is not alone, but he is especially passionate in his conviction that books and photography are made for each other and that the photobook is vital in aiding visual literacy in the digital era.

What better than to centre a project on one of the most influential photobooks in recent history? The La Brea Matrix fixes on one image as symbolising Shore’s achievement. Six young German photographers were invited to work in LA and find a point of reference in Shore’s photograph.

It was a slightly daunting challenge, but essentially they were free to do whatever they liked. What they came up with is consistently good, and in some cases – Robert Voit for example – more than good.

The Extended part of the title refers to two other elements. One is Studio LA-X, prints from photographer Klaus Weidner’s archive of negatives purchased at auction. The photographer or photographers are unknown, but the systematic, topographical nature of the work, documenting LA’s road network and intersections, relates not only to Shore et al but also to Google Street View.

The other element is an example of what Schaden calls a photobook study, a way of studying and understanding photobooks. Here, he sees his presentation of a network of photobooks as “a rhizomatic map” detailing patterns of influence and empathy centred on Shore’s photograph.

It’s a compelling and potentially rich way of exploring the subject. The Photobook Museum deserves to have a promising future.

David Godbold is best-known for his busy, virtuoso ink and wash drawings, which are either naturalistically compact or blown up to large, unlikely scales. Such devices as deliberate pictorial implausibilities or irreverent, often sarcastic annotations, marginalia and titles undercut the earnestness and occasional pomposity of their classical idiom.

He also gives cartoons and other trivial imagery, such as doodles, the same weight as notionally high-art material. And he has gone further by involving found ephemera such as flyers, old tickets and children’s exercise books.

One paradox he sets up is that the prolific textual elements, which seem to intrude on an otherwise intact illusion, are just as much representations as the underlying drawings. As are the apparent doodles and scribbles. They are part of the picture. Is the persona of the writer of the captions and annotations (a consistent sardonic wise-guy) a reflection of the artist or a construct created by him?

Either way, the implication is that he does not trust any particular representational system, including the sample case of the classical European tradition, seeing it as freighted with ideological and other agendas.

His new work, in a big, substantial show, dismantles the idea of a complete representation more than ever, increasingly emphasising the scaffolding – physical and conceptual – that frames it. His relentless, sarcastic humour is still a fault line that divides his audience. You love it or hate it, with little middle ground.

Belgian artist David Claerbout has built an international reputation with video installations that open up and occupy an intriguing middle ground between still and moving images, offering multiple viewpoints and temporal elasticity.

It’s rich terrain for the consideration of such notions as past and present, memory and experience, reality and illusion, and he’s not the first to realise that. Film-makers have been especially interested, including for example Akira Kurosawa (Rashomon), Alain Resnais (Last Year at Marienbad) and Chris Marker (La Jetée). Among contemporary artists, Niamh O’Malley works in a comparable vein.

The Project features four projected works by Claerbout, three sequential and one, The Long Goodbye, running continuously. Each is never less than watchable, which may sound like faint praise, but they are really watchable in that they are visually lush and inviting.

Give one a moment and you are likely to find yourself settling in to see where it is going. That does lead to a recurring problem. Each piece sets up what might be described as low-level dramatic tension and a subtle forward momentum, but there is no resolution and no advance. Rather, the logic of the structures he creates is inescapably circular and repetitive. Moments are considered and reconsidered ad infinitum.

In the work on view, that is in some ways a strength and in many others a defining, mildly frustrating limitation.