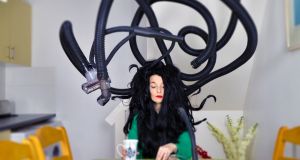 Not to be Known by Aideen Barry 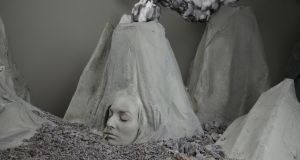 Mediations on Being Volcanic, by Aideen Barry 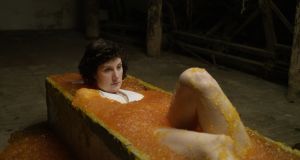 A Numbness in the Mouth by Kevin Gaffney

It’s typical of Aideen Barry that, when she obtained an arts residency at the Kennedy Space Centre in 2008, one of the works she produced was Vacuuming in a Vacuum, a video based on a performance that features the artist, free-floating in a vacuum chamber, vacuuming up the dust. Writing in Creative Ireland, Noel Kelly described her thinking: she “takes her long-standing ambition to be the first Irish woman in space and asks ‘What would I do there?’ ”

The implied answer is: clean the house. Kelly relates her action to the realm of traditional female domestic responsibility, “in keeping with the repetition of the rosary and the daily repetition of tasks in the Irish home”. Visit Barry’s excellent survey show at the RHA and you will get a vivid sense of the artist’s fascination with – and ambivalence about – convention, routine and domesticity. On the one hand, routine is essential and desirable. On the other, it is limiting and containing and can lead to patterns of obsessive compulsion.

Born in Cork, Barry went on to live and study in Galway, and in her early work developed a gothic performance persona as a pale-skinned, black-haired femme fatale clad in a lush red ballgown. Variations of this basic persona have followed, but from the off she vigorously undercut her character’s grand, optimistic notions of herself, challenging her and subjecting her to many kinds of indignity and misfortune. Heterotopic Glitch, a bold collaborative project with Anne Ffrench, undertaken as part of Kinsale Arts Week in 2008, could be seen as a culmination of this strand of Barry’s work. Cast adrift in transparent “bubbles” on the harbour waters, a troupe of women volunteers, clad in Barry’s trademark red dresses, struggled hopelessly to maintain their poise while subject to the fickle movement of waves and breezes, to the strains of The Blue Danube.

At the RHA, she develops further a device she has used previously. A large area of the gallery is occupied by an ominous forest of shards: looming, teeth-like spikes. Stick your head through a circular opening in each shard and you are into a video. It’s an exceptionally effective mode of presentation for an anthology of related works. While the tone is usually tragicomic, there is real bite to the tragedy. She is good at imparting unease and discomfort, employing frenetic pacing, jumpy stop-motion animation, feats of endurance that challenge physical limits and the sudden manifestation of disturbing phenomena. One can see the logic of Imma’s invitation, asking her to give a recent performance in response to The Passion According to Carol Rama, which has the quality of an outspoken, abrasive, internal monologue.

Barry’s characters are driven. They want to be what they seem to be on the surface, but they can never quite convince themselves. The normality they aspire to remains uncanny and strange. Divisions between human, animal, automaton and inanimate mechanical devices blur and disappear. The apparatus of social convention, the everyday world and its rules and expectations, becomes a nightmare. Hitchcock, Tim Burton’s Edward Scissorhands, Marina Abramovic come to mind, along with Kate Bush, not alone for her gothic leanings but also for Mrs Bartolozzi, her song about a washing machine: “Slooshy sloshy, slooshy sloshy / Get that dirty shirt clean . . . Everything clean and shiny / Washing machine / Washing machine / Washing machine.” Listen to the lyrics and it’s an extraordinarily close musical equivalent to a piece by Barry.

Kevin Gaffney is the first Irish artist to receive a Sky Academy Arts Scholarship. His 17-minute film, A Numbness in the Mouth, is the fruit of that scholarship. The atmospheric setting is Shackleton’s Mill in Strawberry Beds, which produced flour for nearly 200 years right up until 1998. It was marked for redevelopment and acquired by Fingal County Council following considerable public criticism of plans for the site. The mill, enveloped in trees and perched on the river, makes a stunning setting.

Gaffney considers the mill’s history and then projects it into the future. Men worked making flour and women worked in the laboratory, testing and regulating production. Management took a staunchly anti-trade union stance in 1913, and the mill was briefly occupied by the Irish Citizen Army in 1916 because it acquired flour sacks from Belfast – they were set alight.

Gaffney imagines a dystopian future Ireland, a 1984-like totalitarian place. Speaking in Irish, a jaunty Sinéad Ní Uallacháin, speaking for the Ministry of Food in Hunger Games showbiz style, announces that bumper crop yields mean every citizen must consume 5lb of flour daily. Her companion, Jenny Swingler, offers suggestions for how this might be achieved.

The film then shifts gear, as both performers drift into dreamy introspection under the influence of their watery surroundings. Swingler, having been liberally dusted as she stands under a stream of newly milled flour, immerses herself in a bath of orange viscous liquid that might suggest jelly, marmalade or fish roe. She and Ní Uallacháin meditate on ways of transcending the self, transforming into another being or being entirely consumed and absorbed.

A 1950s advertisement for bread, found at the mill, is interspersed throughout. Gaffney is at home in the media world of reality TV, gameshows, music videos and social media. He gets the tawdry carnivalesque of the propagandist broadcast, and then, even more so, the contrasting, subjective musings of the two women. It could be that the two strands coexist a little uneasily in a limited time frame. Equally, that may be his intention. It’s certainly a film that demands to be seen more than once.

Auctions and fairs: a guide to this week’s events

‘In five seconds my life changed. I was worse than the worst jazz snob’
9