Fathers and son in the frame: two Coyles and the Yeats patriarch impress 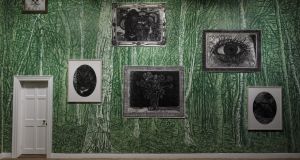 Edgy: work by John Coyle and Gary Coyle in Now Came Still Evening On at the Dock, Carrick-on-Shannon

Although he was born in Scotland, the painter John Coyle is most strongly identified with disarmingly low-key paintings exploring his immediate environment for many decades: his home, his studio, and the surrounding terrain in Dún Laoghaire. He studied at the National College of Art and Design in the 1950s and has memorably described the strict regime in the life room, where the model would daily resume one pose for three weeks at a time, as “like being part of an experiment in time-lapse photography”. There was “ample time for boredom”. By contrast, Paris, where he continued his studies, was as thrillingly bohemian, open and stimulating as he had imagined.

Besides doing his own work he pursued a career in teaching, eventually heading the art department at Blackrock College, where he became vice-principal. He has also exhibited in Ireland since as far back as 1948, and regularly with the RHA since he became an associate member in 1979 and a full member a few years later. His work is usually modest in scale, carefully observed and crisply composed. In subject matter it extends from figures and studio and house interiors to the local suburban fabric and the wider setting of the harbour and the sea.

His paintings have a classical, self-contained poise. Always measured, never overly elaborated, he can be so laconic in his pictorial manner that he verges on Richard Diebenkorn-like abstraction. While in terms of colour and tone the work is quite evenly pitched, he does like to push things a bit, often introducing some edgy notes of sharp contrast or discordant colour. As if to emphasise this subtle harmonic disruption, his work at the Dock is given an asymmetric hang in a fairly symmetrical room.

Speaking of edgy, he is also the father of Gary Coyle, and the show is a joint enterprise. Did the younger Coyle pick up on the restrained hints of discord in his father’s paintings? He grew up in Dún Laoghaire, and, in terms of the art that he has gone on to make, what he took from the utopian suburban setting was a sense of an underlying darkness, as the title of his 2007 solo show at the Kevin Kavanagh Gallery, Southside Gothic, suggests. Or, even more starkly, the performance and publication piece he made a year earlier at Project, Death in Dún Laoghaire, which centred on a morbid memoir of experiences of fatalities from childhood to adulthood.

He has written of being preoccupied with death. His Dún Laoghaire is bounded by the brimming sea and the ominous, enfolding pine forests of Wicklow. The watcher in the woods, a recurrent motif, is linked to the narrative patterns of popular horror movies. At the Dock, Coyle has devised and, with David Smith of Atelier, made a woodland installation, a vast enlargement of a digital drawing of “one of the seven woods at Coole Park, near Gort, Co Galway”. Coyle sees it as a place of enchantment, where “Yeats took Lady Gregory to look for faeries and other magical creatures”.

What we find in his enchanted wood is a pop-cultural meme: multiple images of various cats and internet superstars, arranged in the form of a Gothic portrait gallery, each larger-than-life feline treated with attentive gravity in densely worked charcoal and enclosed in a drawn frame. There is one human watcher as well. Kittens doing entertaining things should be a light enough topic, but Coyle generates an atmosphere of ominous excess: the depth of the dark wood is juxtaposed with a superfluity of sharp-eyed cats. The show’s elegiac, slightly foreboding title is from Milton’s account of evening in paradise.

Gary trained first as a sculptor and has not exhibited paintings; he may never have painted at all. But he is an exceptional draughtsman and has specialised in charcoal. He has also worked just as successfully with photography, installation, documentation and archives, and narrative performance, and has built up an impressive body of work of ever-expanding ambition.

John Butler Yeats, father of Jack B and WB, is to a large extent the other, oft-forgotten Yeats. He trained as a barrister and, when he began devilling for Isaac Butt, was in the habit of making impromptu portrait sketches of the dramatis personae in court. He had a passion for art and, with the benefit of a small family income, took the decision to study at art school in London. His in-laws, the Pollexfens, were appalled that he would sacrifice a lucrative legal career for the uncertainty of artistic life.

In all likelihood he felt a degree of unease about the decision himself, because from then on, despite his clear ability, his restless mind seemed to prevent him settling into any satisfactory pattern of activity. Overconfidence alternated with hesitancy and doubt. He had mixed feelings about the success of his sons. He relished conversation, debate and the working process, but had something of a closure complex, being reluctant to conclude a painting, so that he could simply fail to finish or, at the other extreme, overwork a subject.

One can see why the informal, conversational portrait sketch perfectly suited him. (He remained an uneasy oil painter, even though the portrait paintings are estimable.) A selection of sketches from the Niland Collection makes up this terrific exhibition, atmospherically installed overlooking the river Moy. The sketches are small and demand close viewing. They also reward it, with tremendous vivacity and delicate defining touches. Yeats feels his way towards character, and generally finds it.

That so many of the sitters are historically familiar individuals adds to the experience, bringing them to startling life.

Jessica Chastain: ‘It was a very difficult upbringing’