‘Deepdrippings’: Painterly explorations that are both object and surface 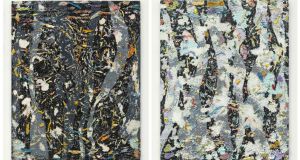 Phillip Allen’s Deepdrippings is an exceptional exhibition: focused, intelligent, lively and conceptually rich. Go back close on a decade and Allen was showing busy, involving paintings in which crisply delineated central arrangements of geometric or organic forms, not unlike doodles, were skirted, above and below, by dense clusters of impasto. These clusters were a bit like the debris and excess materials left over when the pictorial work had been done. They were part of each picture but also curiously separate from it. Their florets and lumps of pigment were in a different register to the orderly patterns of the interior.

It seems fair to say that Allen was at least in part exploring the dual nature of painting, in that it is both object and surface. In each work he unleashed a plethora of recessive surfaces between the two bands of concentrated substance. As if to underline the concentration, the pigment was often coiled in centrifugal masses, like little balls of matter spinning around a gravitational centre. The multiplicity of surfaces in the centre, meanwhile, showcased painting’s slick, illusionistic potential. Not that his paintings were ever slick. He used and uses the gamut of painterly means, but never in a facile or ingratiating way.

Allen was born in London in 1967, and still lives and works there. He studied at Kingston University and then completed an MFA at the Royal College of Art in 1992. Early on, his work suggested a bridge between landscape and abstraction. Generally, his paintings are related to preparatory drawings, if not quite in a conventional sense. Rather he makes masses of drawings, with markers – repetitive, obsessive, they are not that removed from doodles – and occasionally one will strike him as being usable in a painting. So the drawings are like a pattern book, and at some point one of the patterns will seem right for the job. He is not afraid to change direction, sometimes dramatically, yet somehow his core concerns remain consistent.

More recently, for example, in his 2013 show at the Kerlin, he moved away from the binary, thick and thin arrangement. Now it seemed as if each painting’s collection of circular forms was dissolving in a misty drizzle of metallic paint that dripped in rivulets down the canvas. They were tough works to like. It was as though someone had thrown acid over Italian Futurist compositions. A year later, Allen had considerably, even immeasurably refined this approach in work at The Approach in London. The intersecting circles were more fully articulated, and there was much more colour and complexity, more going on in every way.

Now, with Deepdrippings, he has restored the generous impasto. In a series of small paintings, tangled masses of pigment are positioned like informal frames around the edges, with thinner pools of paint at the centre. Thinner, but still multilayered and interwoven. The level of complexity and the quasi-sculptural presence of the work, together with a sense of inexorable, relentless, incremental process and accumulation, bring to mind Irish artist Paul Mosse’s “two-and-a-half dimensional paintings”. Like Mosse, Allen has worked on individual pieces over several years. He is, however more decisively on the painterly side of the sculpture-painting equation.

The investment of time is evident. Rather than fizzling out and becoming stale, his paintings have a teeming, energetic density. The gallery press release likens them to neutron stars, “the smallest but most densely packed celestial objects in existence”. It may sound fanciful but it’s a useful analogy and the work lives up to it. The great Frank Auerbach famously works for months on a single painting, scraping away the previous day’s efforts and trying again. By the time he is satisfied with what he makes, he has gone through a lengthy process of negotiation and revision, earning a familiarity with subject, space and canvas. The final layer of pigment is like skin on the bones of the painting’s underlying history.

Allen’s paintings are more directly cumulative but, especially in the larger paintings, there is a sense of his laying skins of colour over a skeletal framework. Blobs and dashes and pools of thick paint seem to float against textured grounds. The grounds themselves are built up in layers, advancing and receding as they engage we viewers in optical gymnastics. He uses colour, lots of it, sometimes in luscious combinations but, again, he is never facile or clumsy about it. In fact rather than being all impact, his paintings are involved constructions that exercise a sustained fascination and continually reveal more of themselves with repeated viewings.

Allen has consistently been fond of wordplay, and the work that gives the show its title, Deepdrippings, derives from an accident of predictive texting. Besides the quirkiness of titles, he likes to label each piece as an equally fanciful version of the main title. As in Deepdrippings (Ghetto Anglaise Version), or Deepdrippings (International Version). This apparently derives from a convention in Dub music, which is entirely based on versions and variations of source recordings. It’s a nice touch. As Allen uses it, he might be hinting that there are endless possibilities, that a piece is shaped by instinct, design and contingency and there is no one, Platonic ideal version.

It’s a useful way of looking at how he, and numerous other modern and contemporary artists, tend to work in open-ended series. Deepdrippings, in any case, consolidates his position as one of the sharpest, liveliest painters working today.

Deepdrippings runs at the Kerlin until March 25th.