Border tensions and a fraught relationship | Visual art at GIAF 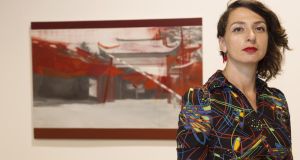 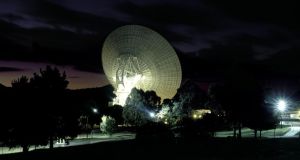 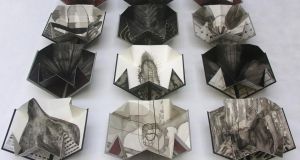 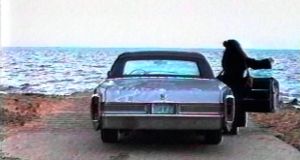 Varvara Shavrova’s rhapsodic Borders explores the phenomenon of borders through one extreme example, which she describes as the longest border in the world: that between Russia and China. In paintings and related video works, she evokes two distinct settings: the desolate expanse of the taiga – an icy, unforgiving and breathtakingly beautiful environment – and the border crossing points, places with the frenzied vitality characteristic of border towns.

Running through both are the arterial routes carrying commercial and human traffic.

Shavrova was born and raised in Moscow, and she was based in Beijing for most of the first decade of the century. Having moved around a good deal, and lived in several geographically diverse locations (even in Ireland, her home is in Dublin but her studio is in Ballycastle, Co Mayo), she was drawn to the “in-betweenness” of borders and the tensions they encapsulate, especially when they are literal fault lines between divergent world views. All of this is dramatically evident where practical interactions occur between Russia and China.

Shavrova’s large-scale paintings are hedged with obstructions to vision, filtered through natural and technological distortions. It is as if we see things via myriad intervening screens, from surveillance cameras and misted-over windscreens to freezing fog and murky darkness. Everything is glimpsed in passing snippets: weary travellers, truck drivers, border guards, the endless frozen roads, the gaudy shops and the impenetrable maze of the hinterland.

It’s disorienting, but also invigorating. There’s the sense of movement, of transition, the comfort of clusters of life and warmth in vast realms of cold nothingness and the wild beauty of it all. It is visually rhapsodic.

Then there’s the soundtrack, which applies to the whole project, not just the videos. It’s a recording of a Chinese choir singing traditional Russian anthems. The sound is familiar but slightly strange, and, Shavrova notes, all the stranger to Russian ears. Her show has an ideal venue in the Shed on the Middle Pier, a suitably in- between location for an evocation of journeying and the unease of the borderline.

Harvest, the centrepiece of Terrain at the Galway Arts Centre, is the latest addition to Martin Healy’s ongoing series of speculative dystopian parables in the form of short films. He draws on fictional and factual speculations about the future, especially as framed in the late 19th and early 20th centuries, in science fiction and on the fringes of scientific theory. The archetypal protagonist in his films is close to a kind of character encountered in JG Ballard’s writing: a bemused, rueful observer musing on the aftermath of catastrophe amid the remains of a failed utopia.

In Harvest that character (Will Seery) is evidently a botanist, who nurtures and analyses large-leaved plants in a huge greenhouse, in fact at the National Botanic Gardens in Glasnevin. The botanist is trying to record and understand the sounds produced by the plant. The role of sound in plant life remains a controversial topic.

We are left to speculate on the implications, but what comes across is a certain anxiety. The lushness of the greenhouse foliage is a bit like a vanitas still life in which the sheer luxuriance of fruit and blossom prefigures transience and decay. Environmental collapse is the spectre at the greenhouse feast.

Terrain is also made up of photographs taken at Glasnevin and an earlier film, Fugue, in which a disconsolate figure (Tero Nauha) wanders through an idyllic but apparently abandoned urban setting. It is the Finnish garden city of Tapiola.

Healy’s films and photographs are all made with high production standards and an impeccable visual sense.

It’s hard to figure out in Sophie Calle’s Double Blind (also known as No Sex Last Night for reasons that become clear when you see it) just how real are her and Gregory Shephard’s actions and motivations, especially as they come across as being so confused and uncertain themselves.

We witness their parallel accounts of the road trip towards their drive-in wedding in Las Vegas. The more we learn, the shakier the whole enterprise seems. But Calle’s forte is to place herself in tricky emotional and social terrain and make compelling art out of the way she and everyone else deals with it. On several occasions she has ruthlessly anatomised the failure of her personal relationships. Even though it is clearly gruelling for her, she also manages to thrive on it.

The other work, Unfinished, made with Fabio Balducci, canvasses the thoughts of those who handle money, from bank tellers to customers at cash machines.

As ebooks advance, Sioban Piercy’s Foreign Bodies is a timely reminder that a book is a multidimensional object, not just a collection of words and pictures. This applies to any book, but venture into the subterranean University Gallery and you’ll see that Piercy’s books shrug off the limitations of two covers and a binding spine and take flight.

In making them she uses drawings, photographic prints, printing and dazzling feats of origami.

She doesn’t eschew language. Apart from the book as an intricate, sculptural construction, she seems especially interested in the relationship between word, image and object, and even seeks to collapse any distinction.

Witness her inclination towards the mystical, the mythical, the esoteric and the biblical, where words carry the weight of reality. And there is an emphasis on the corporeal body, the desired “other” and images that are indistinguishably close to what they notionally represent.

Piercy is also a consummate technician. Put all that together and you have a knock-out exhibition.