Sculpture reflects a world of discord and uncertainty 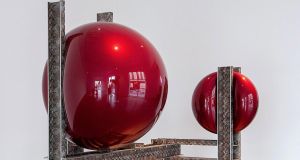 What is it? Snake and Apple (2018) is a sculpture by Siobhán Hapaska.

How was it done? Hapaska is known for using an exceptionally wide range of materials (including concrete cloth, for example, synthetic fur and various industrial elements) in unpredictable, even incongruous combinations. Not in an arbitrary way, however. All the evidence is that she is extremely interested in and careful about their precise character, the ways they interact and what they imply. She is also open to combining realist and abstract idioms, as happens here, in a kind of aesthetic and sensual short-circuiting.

Snake and Apple presumably alludes to the story in Genesis in which Eve is tempted by a serpent to eat the forbidden fruit, traditionally pictured as an apple, of the Tree of Knowledge. The serpent was often depicted coiled around the tree trunk. In Hapaska’s sculpture, snakeskin (artificial) is mounted on the surfaces of a right-angled scaffolding of metal beams, the “tree”. The apples are giant red baubles (fibreglass finished with acrylic paint and shiny lacquer?) supported by the structure. Hapaska is drawing on the biblical narrative of the Fall, harnessing its energy, so to speak, and reworking it in a more open, ambiguous way, freeing interpretative possibilities.

Is it a typical work by the artist? Hapaska’s work can vary widely, however Snake and Apple is typical in the way it is so definitely stated – and disconcerting. In one deceptively neat formal package we are being asked to accommodate a cascade of different ideas. We are not allowed to feel too comfortable about what we see and actively encouraged to ask what is going on.

Hapaska was born in Belfast. While her art studies were entirely in London, at Middlesex Polytechnic followed by an MA at Goldsmiths College, it is tempting to ascribe her liking for unlikely, even jarring combinations and discontinuities, and her suspicion of neat formal harmony, to her early experience and awareness of a conflicted, divided society. Even though you could describe her work as immensely polished, it invariably has a spiky, almost truculent presence. Its undoubted coherence is hard-won, even contradictory, emerging from a tricky synthesis of divergent materials, ideas and images.