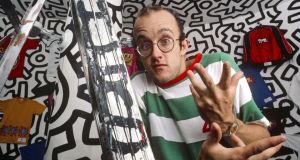 Born in 1958, Keith Haring grew up in Reading, Pennsylvania. He moved to New York in 1978, evolving from a street art start to an international art star. Photograph: Joe McNally/Getty

The potential to be transported to a different place, to hear different sounds, meet different people, engage with different ideas, feels almost as remote a possibility as time travel right now.

Yet on the opening page of Simon Doonan’s crystal clear biography of Keith Haring, he manages to change the reader’s state in an instant, shoving us into the hot tub time machine that swirls all the way back to the early 1980s. It’s worth a soak, check it out:

“It’s a wet Sunday morning on 14th Street in 1983. I am spending a week in New York in order to fling myself into the exploding, neon, post-punk, downtown scene. On the corner of Sixth Avenue I run into a pal named Vikki. She is an LA good-time girl, who has recently moved to Manhattan. She tells me she has scored a job working as a go-go dancer at the newly opened Limelight, a den of iniquity located in a Gothic church on Sixth Avenue and 20th Street . . . I am delighted to run into Vikki. I figure she will share intel on the burgeoning groovy scene, and I am correct. ‘You missed Keith Haring’s opening last night. It was insane. Look. He drew all over my shirt.’ She opens her Fiorucci jacket and flashes her T-shirt, which is decorated with a series of cartoony line drawings. ‘Who’s Keith Haring?’, I ask. ‘He’s like this whole thing’, she explains. ‘His drawings are all over the subway. I’m never washing this shirt again. He’s going to be huge. He already shows at Shafrazi. You’re so out of it.”

At just over 100 pages long, Doonan’s Haring entry in the Laurence King Lives of the Artists biography series (previously featuring Warhol, Artemisia Gentileschi and Frida Kahlo, and upcoming biographies include Yayoi Kusama, David Hockney and Caravaggio), is not just a pocket guide, but offers the reader a comprehensive understanding of the life and work of Keith Haring.

Born in 1958, Haring grew up in Reading, Pennsylvania. He moved to New York in 1978, evolving from a street art start to an international art star, collaborating with nightclubs and the people who frequented them – Grace Jones notably – and the clothes they wore, including Vivienne Westwood and Malcolm McLaren.

His Pop Shop, an intentional democratic approach to selling his work at reasonable prices and commercialising it for the masses, jolted the more formal art world, but spread his message, colours and lines globally. A gay man, he was diagnosed with HIV in 1988, and died in 1990, before the life-saving drugs arrived that now allow people to live with HIV.

Doonan knows his subject well, but he’s also aware of the vast amount already out there on Haring, who perhaps only Andy Warhol – maybe Banksy – supersede as the most commodified, ripped off and referenced pop artist in mainstream culture.

“There’s been a lot written about Keith Haring,” Doonan says, “and I read obviously all of it basically before and during doing this book. What I found, was a lot of people who hadn’t necessarily lived through this period. They didn’t necessarily communicate the crazy energy and the cultural mash up that was going on. It was like living in a pinball machine, this period of the eighties. And I wanted to communicate that, rather than having something that was a little more serious and a little more ‘art world’. I wanted something that reflected the energy of the period. That was very intentional.”

Throughout the biography, Doonan weaves a tale of Haring that is rooted in the landmark moments of the artists’ childhood and career, but also the ecosystem which he simultaneously evolved within and created.

There’s a strong sense that Doonan was also skirting through this time alongside and inside the scene Haring rooted himself in, and the vibrancy of that era pops, of course thanks in part to the marks Haring left on it, often literally, in galleries and clubs, subway stations and street walls, exposing his brilliance to the outside world.

Doonan recognises now that the genesis of this era is as distant to young people today as the first World War was to him growing up in England. At the core of Haring’s life and Doonan’s observations of it is an intrinsic understanding of how the interconnectedness and clash of multiple fizzing cultures at the time contributed to something much greater than the sum of its parts, a point in culture that is still yearned for, replicated, referenced and eulogised about.

“The punk rock movement in the seventies kind of liberated people. After that, all the preconceived notions of art and culture went out the window. Suddenly you had fashion, art, rap, graffiti, hip hop, breakdancing, all of these things were colliding in a way they hadn’t really been allowed to before.

Doonan is interested in the now, and the potential for creativity that is inevitable at the other side of this repressive pandemic

“The art world kept fashion at a distance previously because it thought it cheapens things, makes things seem superficial. Andy Warhol was criticised a lot for being too involved in fashion. But come the eighties, all the preconceived notions went out the window.”

Doonan recalls an event at Barneys when Haring painted a Levis jacket which Iman wore, striding down the staircase with Madonna alongside her. The willingness of artists to be part of something because the buzz was so enticing is something Doonan still recalls vividly, “At Barneys, we would have people like Basquiat, Madonna, Keith Haring, Rauschenberg, all these artists would come and hang out and not think twice about it, because they wanted to. They sensed that there was something going on. This new movement that Madonna was very much part of, Debbie Harry, downtown Manhattan where all this cultural mashup was happening, and they wanted to be part of it. They didn’t require the coercion.

In fairness to artists today, there weren’t all these conflicting events. Now, artists are pulled in a million different directions. Back then it was a smaller universe, so it was easier to get people galvanised for an Aids benefit in 1986.”

His memories of Haring’s work in all its eclectic locations flow from his mouth and mind in a moment when prompted, “Going to the opening of the Palladium and Keith Haring had painted the backdrop. Hanging out in the Mike Todd room [the VIP room in the club, which featured murals by Haring and Basquiat]. Seeing his installation at Paradise Garage. The opening of the Pop Shop, which was so legendary and was so innovative . . . Seeing those black chalk drawings on the subway for the first time in Manhattan. The memories are very vivid because there was nothing blurry about what he did. Those murals – Crack is Wack – it was all designed to stick in your mind. All intensely visual pictograms – Radiant Baby. His work was designed to lodge itself if your memory. I remember all of it.”

In excavating an era with a sort of frank coolness, Doonan is interested in the now, and the potential for creativity that is inevitable at the other side of this repressive pandemic.

“I think it’s already happening,” he says of the Neo-Roaring Twenties, “Young people are already out there making things happen, doing crazy stuff. All the young people I know, the kids of my friends, they’re all up all night doing god knows what. They’re doing what young people are supposed to do in their teens and twenties: having a raving, crazy time. And I think that the repression they’ve experienced because of Covid is going to produce explosive creativity.

“I think it’s already probably in motion. I couldn’t tell you what it is, because I’m 68 years old, but I believe in that. I grew up in post-war austerity, and before we knew it, the sixties came along and everything exploded in Strawberry Fields and technicolour and swinging London. I’ve seen these protean [moments].

“The seventies, which was a time of austerity in America and England, produced punk rock, and then new-wave and the eighties and Keith Haring, so I believe absolutely in that. People talk about the Spanish Flu and what happened afterwards, but they forget to mention the first World War. The first World War had an even bigger impact on the population, a devastating loss of life and [people were] staring at the end of the world, looking at armageddon.

“Then the Spanish Flu comes, and then the period of unfettered, uninhibited creativity explodes in the twenties and thirties. It’s logical. I absolutely believe in it. I’m very optimistic about it. I would suspect it’s all underway already.”