We take a look back at the last 100 days of Donald Trump's presidential campaign. 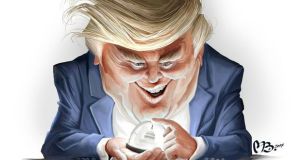 Since his inauguration on January 20th, US President Donald Trump has dominated the global news agenda like no other person on the planet. His first three months in office have been characterised by policy reversals, late-night Twitter outbursts, political mis-steps, and “alternative facts”. While many question his value as a world leader, he has been a gift to the world’s satirists.

The illustrations in this series – co-ordinated by the Danish newspaper and website Politiken, and including the work of Martyn Turner of The Irish Times – come from some of the world’s best satirists, artists and cartoonists. Working for media outlets in Europe, Asia, the Middle East and the Americas, they have shared their unique views of President Trump’s first 100 days in office.

In a week of tributes to John Hume, a 12-year-old has the biggest impact
7