The market where fame and overhyped art meet

Dalí, Bacon, Warhol, Hirst: they are not con artists but their reputations are overinflated 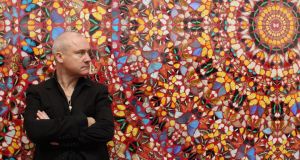 Damien Hirst in front of one of his works. Photograph: Oli Scarff/Getty Images

In the museum business – if you can look on it as a business for a moment – it is said that if you want a surefire winner of an exhibition, one that’s going to bring in the paying public in droves, just put the word Impressionists or Impressionism in the title. Depending on the quality of the show, visitors might carp, but that’s after they’ve been to see it. Equally, there are certain individual artists whose names alone are enough to guarantee the success of a solo exhibition.

Rembrandt, Leonardo da Vinci, van Gogh, Salvador Dalí, Picasso and Andy Warhol, for example, have that magic something. Apply Thomas Carlyle’s Great Man theory and it seems simple enough: these artists – usually men – are so exceptional that they shape the course of art history and transcend their time, reaching out to a universal audience. The achievements of certain individuals defy conventional measure. Van Gogh’s work, say, has the extraordinary capacity to encapsulate the essence of a range of human experiences, from the intensely painful and personal to the broader realities of our communal lives.

At a certain point, though, something else kicks in. Fame becomes self-reinforcing and exponential, as in the case of a single iconic work such as Mona Lisa. Nor is this effect restricted to the popular arena. Academic clusters seem to form around some individuals and not others who might seem to be of equal or greater interest. There is a certain inevitability to this, and it is not entirely independent of the art market.

Museum collections and exhibitions, key curators, academic opinion, publishers, auction houses and big collectors can all influence the public perception and market value of individual artists. Rather than being a number of independent, objective agents, all are part of an interconnected package. The links are of varying kinds, from the unwitting to the calculated, but they are always there. If we’re told something is worth €1 million, we’re going to be curious about it.

At the same time, most people could probably mention artists who they think are overhyped in one way or another, but that can be largely a matter of personal preference. One person will love precisely what another hates about a particular artist. And it’s usually not true to say simply that the art megastars are no good at all, in the way that some people dismiss Picasso’s work as a huge con trick; just that the level of their fame is disproportionate.

The Francis Bacon industry is a case in point. Hardly anyone would deny that Bacon is a major artist, but the volume of scholarly attention and publishing devoted to him is mind-boggling, and, one suspects, not unrelated to the record breaking $142.4 million paid for his 1969 triptych portrait of Lucian Freud last year at auction in New York, an event that marked his ascendency into the market stratosphere. Much of the literature and discussion around Bacon brings to mind Woody Allen’s spoof New York Times book review of “the long-awaited first volume of Metterling’s laundry lists (The Collected Laundry Lists of Hans Metterling, Vol I, 437pp)”.

Andy Warhol is unquestionably a major figure in modern art history. When the philosopher and critic Arthur Danto happened to see his Brillo Boxes on show in 1964, he realised the game was up for traditional aesthetics. Echoing Marcel Duchamp’s appropriation of a urinal, what made the boxes art had nothing to do with their visual qualities and everything to do with Warhol’s intention. The idea is all. Yet that doesn’t save us from the physical banality of so much of Warhol’s work.

The point about Warhol, Danto argues, was not visual, yet his signature visual style has become precisely the point. Its banality, its recognisability as Brand Warhol and the many associations attached to that, is what makes it desirable for many. Aesthetically, Warhol – and, one might add, Damien Hirst and Jeff Koons – are really footnotes to Duchamp, yet somehow their reputations, and their fame, have become massively overinflated.

Salvador Dalí has long fascinated a huge audience of fans and enthusiasts. Again, he’s an undeniably important artist. By putting his conventional virtuosity at the service of surrealist imagery, he created a body of work that is haunting, intriguing and influential on many fronts. (Surely the visualisation of James Cameron’s shapeshifting Terminator owes something to Dalí’s melting clocks.) But commentators can sometimes overanalyse the man and the work, and credit both with a profundity and subtlety that is not really there. Like several other art stars, his showmanship was as much a part of his practice as the work itself. It’s hardly coincidental that both Hirst and Koons have expressed their admiration for him.

One might have thought that the advent of the internet and the ease of research it offers would make familiarity with a greater number of artists more possible, that innate curiosity would prevail and that people would cast their nets wider and the market would expand and diversify. In practice, the market has indeed expanded, but not diversified. In fact, if anything it has narrowed, globally concentrating attention on a top 50-100 or so artists. It’s hard not to think that the lowest common denominator, and the bottom line, still rules.