San Francisco Museum of Modern Art, reopened after a $305 million expansion, is now the biggest gallery of its kind in the US and has been transformed into a suitably blue-chip space 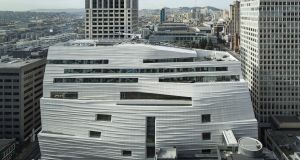 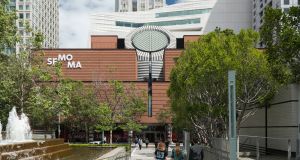 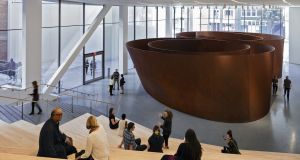 The US is home to some of the world’s greatest modern art galleries. In New York there is the Museum of Modern Art (MoMA) and the Guggenheim. In Chicago, the Art Institute. In Los Angeles, Lacma. But San Francisco? For a long time, the city would not have sprung to mind as a destination for seeing modern art. But now, with the recent reopening of the San Francisco Museum of Modern Art after a three-year, $305 million (€272 million) expansion, that might change.

The museum has unapologetically presented itself as the west coast’s answer to MoMA. Its inaugural displays have featured a heavy-hitting selection of the biggest names in postwar and contemporary art, including Andy Warhol, Roy Lichtenstein, Ellsworth Kelly, Clyfford Still, Agnes Martin, Gerhard Richter, Alexander Calder and Richard Serra.

Following its extensive expansion and renovation, the museum has more than doubled in size and, with 170,000sq ft of indoor and outdoor gallery space over seven floors, it is now the biggest museum of modern and contemporary art in the US. The new Pritzker Centre for Photography on the third floor is the largest space dedicated to photography in any US art museum.

The original 1995 building by Swiss architect Mario Botta was designed to appear weighty and solid, with its imposing brickwork and zebra-patterned central oculus. It was a safehouse for culture on Third Street in the centre of the Soma district, at the time a rather rundown part of San Francisco. But much has changed since then: Soma is now a rejuvenated hive of activity, home to many of the city’s museums and the core of the start-up scene.

New exterior
The gallery’s new section, designed by Norwegian architectural firm Snøhetta, reflects this change. It is grafted on to the Botta building, and wraps around a hotel on the corner of Third Street to create a second entrance at Howard Street. The new exterior on this side of the gallery is in stark contrast to the solidity of Botta’s construction: the creased white frontage, with its uneven, undulating surface, is intended to evoke the fog and water of San Francisco Bay. It appears light, almost insubstantial, reflecting also the bright new optimism of the area.

The gallery’s radical expansion was prompted by a dramatic agreement with Doris and Donald Fisher, founders of the Gap clothing empire. Two days before Donald Fisher died, he and his wife agreed to a 100-year loan to the San Francisco museum of their vast art collection, comprising some 1,100 works. The couple began collecting art in the 1970s, and amassed a hugely impressive collection of modern and contemporary paintings and sculpture, which for many years was on display at Gap headquarters in San Francisco.

Some 260 works from the Fisher collection form the core of the 19 exhibitions in the newly reopened museum. Many of the highlights of the new space come from the Fisher collection: there is a room of magnificent Warhols, including an iconic Triple Elvis screenprint; several stunning Sol LeWitt wall drawings; and a series of spaces dedicated to the abstract canvases and reliefs of Ellsworth Kelly. There is also a wide-ranging collection of Richter works, ranging from his monumental “squeegee” abstracts to his haunting blurred photographic paintings; a so-called Motion Lab dedicated to Calder’s signature mobiles; and an intimate octagonal space displaying several Agnes Martin paintings.

The Fishers’ donation has transformed the space from a well-run but limited gallery with a rather patchy collection – it had only a few masterpieces, such as Henri Matisse’s Woman with a Hat, Mark Rothko’s No 14, 1960 and an impressive selection of Paul Klees – to a monumental destination for viewing modern and contemporary art.

However, the Fishers’ preference for post-war pop and abstract art means their collection is limited to mostly European and American white, male artists of the past 50 years, an issue the museum will hopefully address with its forthcoming exhibition programmes. In what appears to be an attempt to redress the balance, two major newly commissioned works are by female artists: a large-scale site-specific wool mural by Dutch artist Claudy Jongstra, and a pair of paintings by Julie Mehretu, who was born in Ethiopia and is now living in New York.

That said, the current display focuses on the “blue-chip” nature of the museum’s new collection, a description that is surely not accidental in the new San Francisco, a city of start-up excess and burgeoning tech wealth, of investors and collectors with money to burn. Indeed, a huge amount of gallery space is given over to the museum’s Campaign for Art.

Some 600 art works by big names such as Jackson Pollock, Jasper Johns, Joseph Beuys, Jeff Koons and Ai Weiwei, as well as Irish-born artists Francis Bacon and John Gerrard, have been selected for display from more than 3,000 works that have been donated or promised to the museum since 2009. Their very prominent presentation, no doubt intended to demonstrate the museum’s appreciation of its donors, is also an unabashed attempt to woo new art collectors and investors.

At the same time, however, the space is trying to make itself more accessible to the general public. It is offering free admission for under-18s, has initiated an extensive education programme, and the first two floors of the museum are free to the public. The 45,000sq ft of public spaces feature several artworks, including San Francisco native Richard Serra’s monumental Sequence.

More accessible
Embracing the tech culture of the city, the museum has designed an innovative app in partnership with local start-up Detour. In an attempt to make the museum experience more accessible and interactive, the app offers guided audio tours by unexpected narrators such as cast members of HBO’s Silicon Valley and a San Francisco Giants baseball coach. The app uses location-aware technologies to navigate users through the museum, but also, if they please, out into the surrounding neighbourhood – a virtual breaking-down of the boundaries between the hallowed halls of the gallery and the bustling streets of the city.

San Francisco has changed radically since the old space closed its doors temporarily in 2013. It is now a city buzzing with start-up wealth but showing disconcerting signs of an ever-widening economic disparity. Although the gallery is attempting to address this by connecting with the neighbourhood and local community, it remains to be seen what its place will be in today’s increasingly polarised San Francisco. But if the inaugural display could be considered a statement of intent, the new gallery is clear about how it wants to present itself: it has been transformed into a blue-chip, big-name gallery for a buzzing, blue-chip city. It is now a gallery at the centre of the art world, in the heart of the tech world.