STEM subjects all very well, but it’s art that will create undreamed of jobs

It’s a convincing exhibition, exploring what it means to be from a place, how landscape affects us, and how we live in society 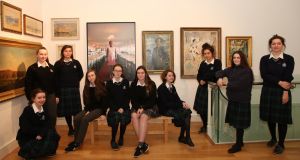 The pieces in the exhibition were selected from the British Council collection by fifth-year art students from St Oliver’s Community College and Our Lady’s College-Greenhills in Drogheda, Co Louth

In Drogheda, there was a march with placards and black balloons; in Clondalkin, Arts Minister Heather Humphreys sat for a portrait; in Thurles, they made a mural; while, in Glasnevin, the science and art classes got together. Postcards were sent to Minister for Education Richard Bruton from students in schools and art colleges around the country – all protesting the fact that the Leaving Cert Art curriculum hasn’t been updated since 1972.

The day of action, #StateOfTheArt, organised with the Art Teacher’s Association of Ireland (ATAI), took place last October, and their agenda is not only for a complete overhaul of the Leaving Cert art curriculum, but also for art to be included in the STEM subjects: science, technology, engineering and maths. “It should be STEAM,” says ATAI President Nadine Mc Donogh Cunningham.

She’s right. You can take Design and Communication Graphics at Leaving Cert, but it’s fairly narrow in terms of what design can be. Despite the success of 2015’s Year of Design (the report Irish Design 2015: Making Design Matter, has just been launched, and is available at €15 from Amazon and idi-design.ie), the Leaving Cert still draws on an incredibly outdated concept of all that art is. The Art History strand needs a total shake up, while the practical part of the exam doesn’t include digital or video work, and relies heavily on sketching, still life and imaginative composition, all of which are important, but the overall vibe is of a paper that could easily have been current in the 1950s.

A visit to the Highlanes Gallery in Drogheda shows just how out of touch this approach is. In a Sense of Place is a fascinating exhibition, including works by Tony Cragg, Frank Auerbach, Jackie Nickerson, Jeremy Deller, Gillian Wearing and David Shrigley (whose enormous thumbs-up sculpture is currently occupying London’s Fourth Plinth). The pieces in the exhibition were selected from the British Council collection by 12 fifth-year art students from St Oliver’s Community College and Our Lady’s College-Greenhills. A group of them took me on a tour through the galleries, speaking with passion and a depth of knowledge about works including Cragg’s Canoe (1982), a huge boat-shape spread across the floor, and made from pieces of plastic washed up on the beach.

It’s a convincing exhibition, exploring what it means to be from a place, how landscape affects us, and how we live in society, through a series of strong and wonderful works of art. The students were excited about the experience, during which Aoife Ruane, the Highlanes director, and their teachers, had brought them to some of Dublin’s contemporary art galleries. They had learned about curating, care of art works, organisation, research, and how to weave narratives through images and ideas. How, I asked, did that relate to what they studied on the Leaving Cert?

Not at all, was the unanimous answer. Did the curriculum reflect any of the art that had so enthused them during their journey through the British Council collection? Another No. Speaking on the opening night, one of the students, Cáit McArdle, described how the project had given them all “a sense of awareness”, and how they had voiced their opinions, and “suspended the disbelief we had in ourselves to create something beautiful [. . .] We explored ideas of personal and political independence in our own existences,” she concluded.

So how does all this relate to design? Only a few of those who study art at third level will go on to be practising artists. Others will be product designers, graphic designers, make creative interiors, be craftspeople, go into fashion; or simply apply the problem solving and visualisation skills they have learned to careers in IT, film, TV, computer games, and – given the times we live in – a whole new range of jobs and outlets that they, themselves, will help to invent. Including art at the heart of the Leaving Cert brings this into play a stage earlier. As Mc Donogh Cunningham says, “Art encourages lateral and broad thinking. It doesn’t matter whether they want to go on to do art, design or medicine, art is a vital part of learning.”

After a period of negotiation, primarily over assessment procedures, the new Junior Cycle art curriculum is coming on stream. Oddly, the words Craft and Design have been dropped: the new curriculum is called, simply, Junior Cycle Visual Art. While saving on printer ink, it seems an odd move, given how vital design is to the new world order and when it comes to future careers, as well as how deeply rooted craft is in our heritage. Positive elements are the inclusion of digital work, while sketchbook projects throughout the year will be part of the assessment.

Since the #StateOfTheArt day of action, the National Council for Curriculum and Assessment has announced changes to the way the Leaving Cert is assessed, including coursework, but there’s a lot more to be done. According to the 2016 results, Leaving Cert Art is the hardest subject in which to get an A1, leading to a drop in the numbers of ambitious students choosing to take it. To plan for a new year, and a future where our students can to be educated for jobs that don’t exist yet, to create and use things that haven’t even been imagined, we must have art and design education at its very heart.

In Sense of Place runs until January 28th, 2017, highlanes.ie

Dublin band Fontaines DC: The New York Times is raving about them
9