Sean Scully: ‘I don’t lie on a chaise longue with a cigarette holder and a glass of champagne’

The Irish-born artist doesn’t do creative block. Nor, as Beijing hosts a retrospective of his work, does he have time for westerners who ‘keep banging on about Ai Weiwei’ 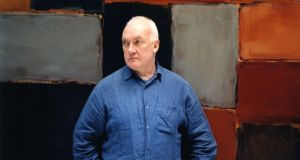 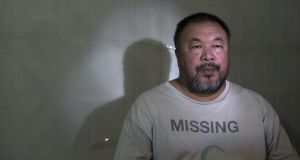 Sean Scully is what some people might call a man’s man. This year the artist will celebrate his 70th birthday. He’s tall, lean and broad-shouldered, with large, powerful hands; you could mistake him for a former boxer. When he speaks he chooses his words carefully and lands them with deliberate distinction. There is a toughness to Scully that is matched by the swagger in his accent, which is largely south London with sudden Irish washes.

Scully is in the top tier of abstract artists, with paintings that sell for more than €1 million. Yet he speaks with as much conviction about his tough upbringing as he does about the finer points of his artistic approach. It’s what has shaped him and his work.

When we first meet, in the rarefied surroundings of his exhibition at the China Central Academy of Fine Arts, in Beijing, he introduces himself as “Sean Scully from Inchicore”. He was born there; he grew up in London after moving, at the age of four, in “dire” circumstances. “The way we lived was exactly like Angela’s Ashes . . . My father was unemployed. We had to live with relatives at their mercy. It was virtually impossible. I had to have the determination of Hannibal,” he says with a wry chuckle, “and of course I came from a crime-ridden culture. A lot of my friends were in prison; some were dead. South London was very rough.”

It’s an unlikely start for an abstract artist. “Well, of course my life is like a fairy story. It really is; it’s cinematic . . . I think I did it by the narrowest of margins.”

“Everything interesting is a fusion,” he says. “I did an interview with Hans-Ulrich Obrist, and he asked me what the definition of creativity was. And I said impurity is the mother of creation. My art is based on impurity. You have to mix things from different refined cultures to get something raw, to make it go again.”

Scully says his work feels naturally at home in the East. “It’s got a lot of Zen energy, and the way that I paint is very informed at the time I’m painting.” He is as deliberate in his approach as in his attitude. “That’s the principle of ink painters: when they make a mark it’s not a mark that’s to be corrected. And that’s the way I paint. I am reacting to the painting, but I also, in a way, like to think that I unpack it. It’s already made.”

Abstract work at this scale and of this quality, its fields of colour applied in layer after layer, seems to hum on the canvas. Look at the work of Mark Rothko, for example, and it’s easy to imagine that, were you to listen hard enough, you’d be able to hear the piece make a sound, like a form of synaesthesia. The best of Scully’s work is similarly resonant. “I think that I make chords when I paint, so I think you would be listening to the cello. It’s deep and it’s resonant. A lot of people have compared me to Brahms – that slightly melancholic sensuality that’s highly structured. Well, that describes my work right there.”

Scully begins each painting with “a kind of urge. An urge to make; it’s an urge to create. It’s followed by a great sadness.” He has described how he falls in love with his paintings as he makes them. Afterwards, “the journey’s over, and there’s always a great sense of anticlimax. There’s more of the anticlimactic feeling than a feeling of satisfaction. Of course I’m happy I’ve made the painting, but it’s always sweet and sour when it’s finished.”

“I was in Foyles as a student. I saw this book of Van Gogh’s letters, and I wanted it really badly and I didn’t have any money, so I stole it. That was my solution to a lot: the letters, cars, whatever. About 10 years ago I sent two signed books with a letter of apology, about 30 years after the event, and they wrote back and said I was forgiven. It was a very nice exchange. I had to have that book: for culture. I needed Vincent’s letters. No way around it. I’ve still got it. It’s a beautiful book.”

His upbringing also gave Scully a ferocious work ethic. This year he will show new work at the Venice Biennale, open a permanent installation in Barcelona and have solo shows in Germany, Austria, France and Brazil. In May he opens a show at the National Gallery of Ireland, in Dublin, curated by its director, Sean Rainbird, that will concentrate on his work from the 1980s and 1990s.

The idea of having a creative block is alien to Scully. “I’ve never thought about that in my life,” he says. “I don’t think writers should have writer’s block. I think they should write. Imagine you were a bus driver and you said, ‘I’ve got bus driver’s block.’ Get over it.”

His studio routine these days is built around his family’s schedule. “I don’t lie on a chaise longue with a cigarette holder and a glass of champagne, saying, ‘Darling, I feel so depleted today, I couldn’t possibly make another painting.’ This is not me. I’m rougher than that.”

The Beijing show is the first major retrospective by a western artist in China. When asked if he’s concerned about having a show in China given its treatment of his fellow artists, he bridles.

Scully takes further issue with the question. “Artist,” he says, by way of correction. “You used the plural.” He is referring to Ai Weiwei, with whom he has a curious relationship. In an interview with the Guardian newspaper earlier this year Scully said Weiwei was exaggerating how badly the Chinese government was treating him, “to stimulate his market in the West; he’s playing a game against China, and the West loves him for that”.

Scully says now, “You know, Ai Weiwei is a very unpopular figure here with the artists. Because there are artists in China, many who are very famous, and they’ve got some incredibly successful painters. But the media in the West is very fixated, of which you are a fine example, on Ai Weiwei. And I don’t really know enough about China to talk about it at length.”

Despite these criticisms Scully counts Weiwei as a friend. He taught him in New York, and after our interview they are meeting for lunch. “Whenever I’ve been with Weiwei we’ve gone around free and easy. Today we’re meeting in a hotel. And the thing is, when you politicise somebody you never talk about their work . . . I would venture to say you know more about his political profile than you do about his work. And that’s pretty much true of everybody.

“He’s a nice person,” Scully adds, almost as an afterthought. “What I find really interesting – and what’s strange about life – is that Weiwei and I both have five-year-old sons. And the most famous western artist in China is me. And the most famous Chinese artist in the West is him. Now what do you think about them apples? Is that not funky?”

He laughs at the thought. “He says I argue all the time, but I think he’s probably an argumentative person.”

Scully is full of praise for the current arts scene in China. The previous night he visited a friend’s studio in one of Beijing’s artistic districts and was enthralled. “I don’t think people in the West understand the profundity of the creative energy here. They keep banging on about Ai Weiwei. There’s thousands of artists here and thousand of exhibitions going on all the time.”

Scully had a son from a previous marriage who died in 1983. Life for him now, he says, revolves around Oisín. His family are mostly based in New York, but Scully is thinking of a move back to Europe.

“We built a new studio on the other side of the river. We moved out of Manhattan because of Oisín again. We’ve become like bank managers from servitude. We used to be renegade travellers, cut-throats, brigands and thieves; now we become domesticated. It’s called parenthood. Instead of piracy we’re involved in parenting. Yes: the paucity of parenting,” he says with a delighted grin.

For now, though, he’s heading back out on the road for more interviews. “What I do is more like a rock band, or it has become that way. I had enough of those penny-whistle tours. I did a painting in an apartment in a corner . . . in Berlin. Now that painting that I’ve called Spider is no longer there. No doubt a family moved in and scraped it off, not knowing they were scraping $1 million off the wall.”

He’s pleased with the notion. “That’s the job of art: to undo the logic of the world.”