Artist Mick O’Dea at work in a 'pop-up' studio in Stephens Barracks, Kilkenny where he painted portraits of Kilkenny Arts Festival performers and also recorded some of the festival’s concerts and events. Video: Bryan O'Brien 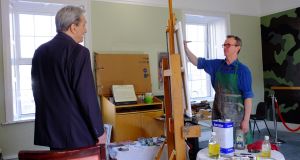 A farmer’s life may seem an unlikely vocation for one of Ireland’s best-known artists, but it was once the planned career path for Mick O’Dea.

The energetic 57-year-old is remembering his childhood living above his parents’ grocery shop and bar with his four siblings in Ennis, Co Clare, as he paints three-time US poet laureate Robert Pinsky.

“I used to tell people it was like growing up in a corridor. The pub has certainly had an influence; it made it comfortable to be around people. Everyone has a story,” O’Dea says. “I’m proud of where I’m from, my parents and my people. I’m grateful of the opportunities afforded to me. I’m a very lucky man.”

O’Dea, who was elected as president of the Royal Hibernian Academy last year, is on day seven as visual artist-in-residence at his temporary studio in James Stephens Barracks for the Kilkenny Arts Festival.

Each day of the festival, the award-winning artist has painted a portrait of key performers in the 10-day festival live in front of a public audience.

“I’ve geared myself for it. I’m aware of the privilege I’m having meeting fascinating people and being able to paint them,” he says.

O’Dea says an unexpected side of his personality surfaced during the experience.

“There’s a latent performer show-off in me that I hadn’t anticipated before, but that’s going okay because the work’s going okay; but I’d hate to have a meltdown in front of the public. Maybe it’d be nice to have a hissy fit like the rocker and rollers do . . . there’s that element of live performance.”

“I depend an awful lot on the subject to inform me on how I’m going to paint and I get energised by it,” he says.

Pinsky, whose 40-year-career has even included a guest appearance on The Simpsons, listens intently to O’Dea speak about his father’s humble beginnings before he left for the US after the Civil War.

He says he returned with enough “Yankee dollars” to buy the business and a farm with sheep, cattle and horses.

“I was meant to be a farmer but it wasn’t my calling. I wasn’t passionate about it,” O’Dea says. “I first painted at my local school. I was lucky I was at a school where art seemed valued.

“I was always really looking forward to the opportunity to paint. I remember getting noticed a bit. I wasn’t really good at anything else.”

O’Dea says his parents were very supportive when he decided to move away to study art at the National College of Art and Design and the University of Massachusetts.

He went on to teach in a number of colleges, schools and even at prison for more than six years.

“That was an interesting time. I enjoyed teaching but I don’t miss it,” he says. “That allowed me to develop my voice without depending on the market place.”

“I think Picasso’s influenced me without my being really conscious of it. He never seemed to have a problem moving into different subject matters whenever he needed to,” he says.

“You’re out there in the magnificent landscape and nobody is there. The people are terrific as well,” he says.

Last year was difficult for O’Dea after he was seriously injured in a cycling accident for the second time in five years.

He was on his bicycle on O’Connell Street when a pedestrian on his mobile phone walked out in front of him.

“I’ve not cycled since. About five years earlier on the other side of the road, on the same street, I’d a similar accident, also caused by a pedestrian. I fractured my skull that time,” he says.

“I’ve cycled all my life but now I’m getting reacquainted with walking.”

But the injuries did not stop him accepting the role as president of the RHA.

“I’m very honoured to be representing artists I’ve admired so much over the years,” he says.

“I take things as they come. I love what I do.”