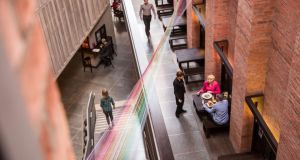 The Mac (Metropolitan Arts Centre) in Belfast has shortlisted artists for its new biennial contemporary art prize, the Mac International, worth £20,000 (€25,320).

Extending to some 25 names (including one collaborative partnership), it’s unusually long for a shortlist.

All were drawn from just over 1,000 proposals for projects. Those projects will form an exhibition at The Mac opening on October 31st, the day after the winner is announced.

Artists from Ireland North and South are on the shortlist, together with entrants from Scotland, England and other European countries plus Israel, Lebanon, South Korea and the USA. Familiar names on the Northern Irish art scene include Dougal McKenzie and Colin Darke, as well as Northern artists based in London, including Roxy Walsh and Mairéad McClean.

The three-person jury comprises Mac curator Hugh Mulholland, Judith Nesbitt of Tate London, and Francesco Bonami, of Fondazione Sandretto Re Rebaudengo, Turin. The prize is funded by the Northern Ireland Tourist Board.