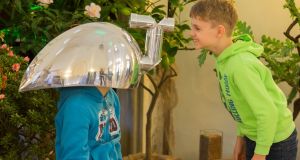 Timon (12) and Max (9) play with an animal view helmet by artists Denis Connolly and Anne Cleary at the announcement of plans for Biotopia, the natural history museum at Nymphenburg Palace, Munich. Photograph: Robert Gongoll 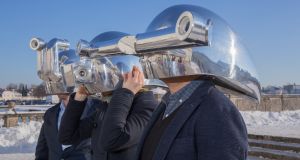 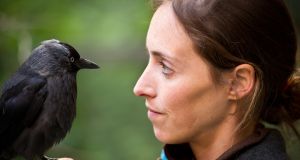 Biotopia in Munich is the brainchild of zoologist Auguste von Bayern, a member of Bavaria’s former royal family 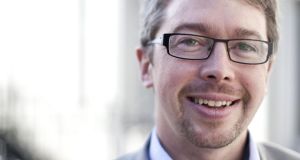 On a crisp night in January, Munich’s Nymphenburg Palace looks like the home of the mythical Snow Queen.

Ducks and geese jostle happily on the frozen pond out front as locals turn their hand to curling.

This former palace of Bavaria’s royal family, and the beautiful botanic gardens out back, are two of Munich’s biggest attractions. But the crowd crunching through the snow this evening are arriving for the launch of a third attraction, coming to life under the watch of Ireland’s Michael John Gorman.

With a budget of nearly €100 million, Biotopia is the brainchild of zoologist Auguste von Bayern, a member of Bavaria’s former royal family. For years she was anxious to find a proper home for Munich’s massive natural history collection. It was a personal endeavour for the 37 year-old: one of the major contributors to the collection was her ancestor Princess Theresa von Bayern, cousin of King Ludwig II, and a leading botanist and zoologist .

“Biotopia is an idea that enthuses everyone who hears of it,” said Dr von Bayern. “Now we have a once-in-a-lifetime chance to realise this idea.”

Bavarians like to aim high, as is clear from Biotopia’s lofty aims: to catalyse public interest in the natural world and underpin Munich as a centre of scientific and research excellence. This will be a 21st century museum with a nod to the past. What it won’t be, Michael John Gorman insists, is a dead zoo.

“Munich’s collection has 35 million weird and wonderful objects but I don’t think people need to see drawers of 10,000 voles’ teeth,” he said.

Instead visitors to the thematic exhibition will be confronted with big questions: how we humans – and the rest of the natural world – live, eat, sleep, reproduce and die. Cross-cutting those big questions will be timely interventions about the risks of climate change or species extinction.

As a fan of Dublin’s soon-to-be-extinct Natural History museum, Prof Gorman is anxious for Biotopia to take the best of that Victorian tradition while dispensing with the worst: the formaldehyde whiff and hands-off approach required with arsenic-stuffed animals.

But aren’t authentic exhibits – poisonous or not – what younger visitors in particular respond to best in a natural history museum?

Prof Gorman disagrees and is confident he can win over the doubters, as he did in Dublin.

“The early days in Dublin were tough and Science Gallery ploughed a lonely furrow,” he said. “Then we got a few top scientists involved and, because they were highly respected, their sceptical colleagues saw how they attracted 100,000 people and got science on the evening news.”

In Munich’s Biotopia, he wants to bring nature to life without resorting to one extreme or the other – neither nailing 35 million objects to the walls nor blowing his budget on wall-to-wall touchscreens. Instead he wants to pull in the crowds with living research, public lectures and open laboratories.

To rub locals the right way and hit the ground running, the Dubliner impressed his high-profile launch audience in Nymphenburg with a presentation in fluid German. But he hasn’t shied away from asserting control, either. Before the 13,000sq m (139,930sq ft) building’s plans were finalised and the concrete poured, the Irishman insisted on first nailing down the museum’s vision and concept in a 300-page master plan.

His form-follows-function approach contrasts with another big museum project at the other end of the country, Berlin’s Humboldt Forum. There, curators are struggling to shoe-horn a museum into the architectural straitjacket of the capital’s rebuilt Prussian palace.

“It was lucky I was hired when there was still a chance to think about what is the best building to support what we want to do,” said Prof Gorman.

It will be six years before the doors open and a lot of work ahead for a man who claims he wasn’t even looking for a job when Munich came knocking.

So what made him take the plunge? Three things, says Prof Gorman: the chance to work with Bavaria’s world-class researchers, the financial and political backing of the Bavarian state government and the crucial support of August von Bayern and her family.

“The commitment and value placed on education, culture and science here in Bavaria is extraordinary ,” said Prof Gorman; something Irish people looking to Germany don’t always realise, with their focus on Berlin. “Munich has the best museums, two of Europe’s top universities and world class research facilities. If we could build even stronger ties between Ireland and Bavaria, I’d be interested in helping as part of my role here.”