How Thomas Kaplan is using art as a weapon of war 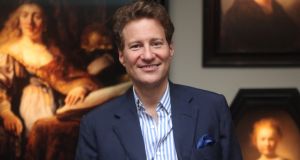 Seventeen days before Thomas Kaplan and his wife Daphne put the world’s largest private collection of Rembrandts on show at the Louvre, a 29-year-old Egyptian attacked a French army patrol with machetes at the museum’s entrance.

After the assailant was shot in the stomach, police found cans of spray-paint in the his rucksack. He said he wanted to deface artworks.

The amateur jihadist and Kaplan, an American billionaire and philanthropist, are at opposite ends of a global struggle, in which Kaplan sees art as a weapon.

“Our sense of mission is to use Old Masters to promote humanism and its noble offspring: tolerance and mutual respect,” Kaplan said at the launch of Masterpieces from the Leiden Collection, which is at the Louvre until May 22nd.

The Leiden Collection, amassed by the Kaplans since 2003, will go from Paris to Shanghai, Beijing and the Louvre Abu Dhabi.

“We are using the most powerful tools we have, Rembrandt and our passion, to build upon the connections that bind people together,” Kaplan said. Art alone may not save the world, he explains, but it can help repair it.

Kaplan made his fortune by investing in precious metals. He and Daphne (“my soul-mate”) purchased a painting a week for five years, accruing some 250 works of art.

The couple hang only contemporary works by Daphne’s mother, the Israeli painter Mira Recanati, in their home. From the outset, they intended their collection to be a sort of library, on loan free of charge to museums around the world.

The Louvre exhibition comprises 30 works, including all 11 of the Kaplans’ Rembrandts. They had never before seen their treasures displayed as an ensemble.

Kaplan financed research for Vermeer and the Masters of Genre Painting: Inspiration and Rivalry exhibition, which will open at the National Gallery in Dublin on June 17th. He will loan three paintings to that exhibition.

Another painting from Kaplan’s collection, Vermeer’s A Young Woman Seated at the Virginals, is the world’s only privately owned Vermeer. It belonged to Sir Alfred Beit, and would today belong to the National Gallery, if Sir Alfred had not doubted its authenticity and sold it.

Though they were known in the art world, the Kaplans preserved their anonymity by naming their paintings the Leiden Collection, in homage to Rembrandt’s birthplace.

But when Kaplan purchased The Unconscious Patient: an Allegory of Smell last year, word of their identity got out. One of Rembrandt’s earliest works, it had surfaced in New Jersey after being lost for 400 years.

By putting their entire collection online at theleidencollection.com in February, the Kaplans lost whatever anonymity remained.

Kaplan says he fell in love with Rembrandt at the age of six, on a visit to New York’s Metropolitan Museum with his mother. The boyish 54-year-old still associates the scent of hot dogs roasting outside the museum with great art.

Kaplan doesn’t take himself seriously as a collector. “It’s not about the collector, but the artists,” he says, quoting the advertising mogul Charles Saatchi. “I get great joy out of lending,” he says.

As he guides me through the Leiden Collection, Kaplan stops in front of a study of an old woman, the first Rembrandt he purchased. “I couldn’t believe that we had acquired a Rembrandt. When the gavel came down, I let out such a whoop of joy that [the man who bid on Kaplan’s behalf] winced and pulled the phone away from his head.”

Kaplan experienced similar exhilaration when he acquired the Rembrandt discovered in New Jersey. He already owned two of the “senses” paintings, illustrating touch and hearing. A fourth belongs to the Lakenhal Museum in Leiden, and the fifth is still missing.

Kaplan was on a British Airways flight leaving London when he learned that The Unconscious Patient was signed. It is the only signed canvas in the series, and the earliest known signature of Rembrandt, done when he was 18 years old.

“It was as if Rembrandt had reached out from the dead,” Kaplan says. “It was a very powerful message: ‘I’m still here. I’m in the room.’”

Kaplan pauses with something approaching paternal pride before Self Portrait in Shadow, painted in 1634, the year of Rembrandt’s marriage. “He’s definitely up and coming,” Kaplan comments. “He’s wearing the beret, which he popularised as a sign of the artist. There’s confidence there; modesty but with panache; the fur collar and upturned moustache. He’s trying to convey a certain rakishness.”

“This is the one that started it all,” Kaplan says before Jan Lievens’s Boy in a Cape and Turban; Portrait of the Prince Rupert of the Palatinate, the signature painting for the Louvre exhibition.

When he loaned the Lievens to the Getty Museum in California, Kaplan saw a girl, about the age of the boy in the painting, hang back from her school group, her eyes locked on the boy’s face. “He touched her heart. She told me exactly what we were going to do with our collection.”

Kaplan says his generosity is motivated less by Judeo-Christian values than the philosophy of Greek stoics, who taught the need for self-control, understanding and fairness in one’s dealings with others. He has been incredibly lucky, he says. “The odds of finding gold or silver are 1,000 to 1 against you. If it happens to you three or four times, you are either a genius or a grain of sand, as Marcus Aurelius wrote. You need to get over it and start giving back.”