How Cubism knocked the corners off Irish art 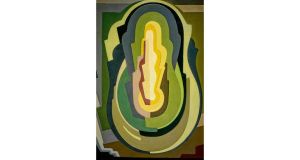 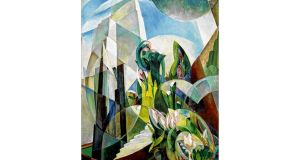 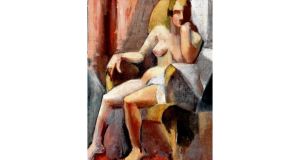 When Evie Hone and Mainie Jellett decided to study with the artist André Lhote in Paris in 1921, they were consciously taking a step away from the certainties of realism and into the unknown realm of Cubism.

Working with Lhote was the beginning of an artistic journey that led to their becoming long-term students of and collaborators with another French artist, Albert Gleizes.

Their enterprise represented the most concerted engagement on the part of Irish artists to date with the still radical movement, and kick-started the advent of Modernist painting in Ireland.

Analysing Cubism in The New Galleries at the Irish Museum of Modern Art (Imma) is the first concerted attempt to explore the varied, durable impact of Cubism on Irish art.

Organised with Cork's Crawford Gallery and the FE McWilliam Gallery and Studio in Banbridge, Co Down, it draws on many public and private collections to bring together works by the main protagonists from both Ireland and mainland Europe, and presents a richly textured overview of interlinked works encompassing several decades.

Cubism is one of the most famous movements in the history of modern European art. With a resonance that goes way beyond its actual historical substance, it came to stand for the Modernist impulse to challenge and provoke, to generally not leave well enough alone.

Even though it emerged among a plethora of radical movements, often in close relationship to them, it retains a singular, perhaps slightly austere mystique, and it still has a capacity to inspire incomprehension and annoyance.

Post-Impressionism, Expressionism, Fauvism, Italian Futurism, Constructivism, Kandinsky's drive toward abstraction, De Stijl in the Netherlands, and even Dada: all arose in an extraordinary couple of decades at the beginning of the 20th century.

Cubism is often linked to abstraction but, strictly speaking, while for many artists it served as a springboard towards abstraction, it remained firmly rooted in the real, outside world.

Its initial flowering is commonly divided into two phases. The first flickered to life around 1907 when Picasso painted his unprecedented, monumental composition Les Demoiselle d'Avignon. This gave rise to what is known as Analytical or Analytic Cubism (hence the title of IMMA's show).

When Braque first saw the painting, the historian John Golding wrote, he "was frankly horrified", but within months it is clear he had taken its ideas on board in his own work.

Les Demoiselle is not strictly speaking Cubist, but it contains most essentials of the movement in its startling appearance.

The second phase, Synthetic Cubism, followed and flourished until 1912. Different historians who are, after all, trying to describe an informal, open-ended series of events have drawn other interpretations of the movement's evolution.

Essentially, Braque drew directly on Cezanne's approach of breaking down a scene into "spheres, cylinders and cones", as he had famously expressed it himself, and, until 1912, he and Picasso worked closely together in forging a radical new means of depiction. During this time, Picasso remarked to Golding, their partnership was so close it was like a marriage.

For Golding, who in 1959 published a brilliant, now classic history of Cubism from 1907-1914, its significance was that it was the first major departure, in 500 years of painting, from "the principles of mathematical or scientific perspective".

That way of viewing a scene, from a single, static point of view, was a central achievement of the Renaissance. The simplest way of describing Cubism is to say that artists devised it as a means of incorporating multiple views of a subject in a single image or object.

The completed picture is a kind of assembly of interlocking planes, each from a different viewpoint. Even as one is aware of the multiplicity of views, the flatness of the paint surface is emphasised.

It's as if Picasso and Braque had turned a key that unlocked a door into a new, endlessly flexible kind of pictorial space. The problem with such a succinct definition is not only is it too neat, but it might encourage too systematic an approach.

And what's outstanding about the work of Picasso, Braque and a few others is that while it acknowledges the underlying formula, it also departs from it at will. And these incalculable departures are essential to the dynamism of their art.

The third member of the early Cubist triumvirate, Juan Gris, was the most systematic in that sense, to the extent that he later felt he was too systematic in his approach.

Inevitably, as its impact spread, artists and teachers absorbed Cubism into several highly theoretical schemes. Cubism played out in Ireland in subtle, often indirect ways. As Dickon Hall puts it in his essay in Analysing Cubism, in the UK and Ireland, "a disproportionately powerful influence was exerted by minor Cubist artists, through their teaching or writing about Cubism, or by artists whose work drew heavily on Picasso and Braque".

Cubist ideas became diluted and acquired local, regional inflections as they spread and coalesced into a number of "national Modernist styles".

In Modernist painting in Ireland, as elsewhere, there was "a softening of the essential principles of Cubism, so it became more of an amalgam of various modern styles than a true representation of Cubism".

This becomes abundantly clear as you make your way around Analysing Cubism. The work of Jellett and Hone is closest to Cubism per se. Jellett, particularly, is an immensely capable artist. She absorbed the theoretical approaches of both Lhote and then, more enduringly, Gleizes, with ease, while always bringing something of herself to the artistic conversation.

At the same time, Gleizes's rather restrictive pictorial methods can squeeze the life out of even her painting, making of it something mechanically decorative, suppressing a necessary spark of spontaneity.

Paul Egestorff's Homage to Mainie Jellett, painted in 1949, clearly meant quite genuinely, comes across as a startling parody that sums up the limitations of her approach. Hone has always seemed less adept than Jellett, even as she was less committed to rigid theoretical frameworks.

One surprise in the exhibition is the sheer number of Irish and English artists who studied with Lhote at one point or another. Lhote translated Cubism into an academic discipline and that is thoroughly evident in the work of Jack Hanlon, May Guinness, Norah McGuinness and, although she was not a student, Mary Swanzy. It's not necessarily a bad thing. Generally it brings an openness, a breezy, Parisian quality to their paintings.

Picasso's artistic trajectory is characterised by abrupt changes of style. Chart his progress and it's amazing how often he left his audience struggling to come to terms with some radical development in his work, even as he had already moved on to something quite different, often well out of the public eye.

He never became identified with a single school, and he never became bogged down in re-fighting yesterday's battles: he left others to deal with the implications and consequences.

He moved on to other things, but Cubism became part of his artistic vocabulary, to be revisited and employed at will. After 1912, he and Braque drifted apart, but Braque remained more committed to elaborating and refining Cubism throughout his life, making many magnificent series of paintings.

As an active movement, Golding draws a line under Cubism after 1925, but by then it had "produced a new kind of reality".

Analysing Cubism: Irish Artists influenced by Cubism is at the New Galleries, Imma, Royal Hospital, Kilmainham, Dublin until May 26th

The largest work Picasso had painted at the time, even he didn’t know what to make of it and wasn’t sure it was finished. It recognisably draws on many sources and influences: Gauguin, Cezanne, El Greco, Egyptian painting, Iberian and African sculpture. Not a fully achieved Cubist composition, its flat, interlocking, overlapping planes and jagged architecture nonetheless map out the mechanics of Cubism.

At first horrified by Les Demoiselles, Braque quickly responded to its artistic challenges. Turning to Cezanne’s typical colouration and subject matter, he carried the artist’s idea of translating the landscape into “spheres, cylinders and cones” much further. Working closely together, he and Picasso devised a way of making paintings that combined multiple views of a subject in one image.

Of all her contemporaries, Mainie Jellett was the Irish artist who most directly addressed Cubism in her own work. But the strand of the movement she and Evie Hone absorbed was mediated by the theories and teaching of André Lhote and Albert Gleizes. Her Decoration, a beautiful composition,shows the influence of Gleizes’s very prescriptive theories about “translation and rotation” and his religious and spiritual ideas.