Has the age of instant access finally put an end to the critic? 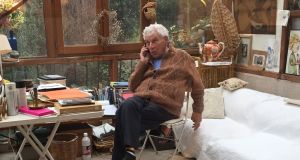 Upon his death earlier this week, John Berger was described by British artist David Shrigley as “the best ever writer on art”. It was not the first or the last time he was so described, but it begs the question; just what made Berger such a great art critic?

Berger is still best known for Ways of Seeing, a four-part television series broadcast on the BBC almost 50 years ago (it is on YouTube in its entirety here). Ways of Seeing presented a vastly different view of what art was (and what the appreciation of art might look like) to anything else then present in mainstream culture.

While its methods were innovative, the opinions and perspectives that it articulated were rarely brand new. They drew on the great philosopher-critics of European art, people such as Walter Benjamin, whose 1936 essay The Work of Art in the Age of Mechanical Reproduction was inspirational in the making of the series. Such views were, however, quite fresh in the context of nationally broadcast, prime-time television. Ways of Seeing was radical not just in the content of the criticism but in the audience it aimed to address.

Berger asked his audience to question him, to be sceptical of what he was saying. Watching him discuss a painting by Caravaggio with schoolchildren or representations of female beauty in Western art with a group of women, you can see the openness to other views, the willingness to learn from others, the desire to let others speak for themselves. Berger displayed a faith in the experience, intelligence and humanity of others which remains inspiring.

Immediate access
Today, criticism is often seen as old-fashioned – why rely on some old fart at a newspaper to tell you what’s what when you can bloody well make up your own mind? We usually have immediate access to the music, films, art and books under discussion, so we can just see for ourselves.

This is a reasonable position; why peruse a dozen 150-word album reviews if you’re just looking for something new to listen to? Spotify can do that for you. In a world where culture is merely entertainment, criticism has no function.

This is not to say that good critics no longer exist. There are many: Hal Foster, TJ Clark, Hito Steyerl and Barry Schwabsky all write with great intelligence about contemporary and classical art. David Toop, Mark Fisher,Ian Penman and Frances Morgan are inspirational music writers. Mark Greif’s recent collection Against Everything is evidence of a sustained engagement with pop culture as a serious concern. Steve Mitchelmore’s remarkable blog This Space is perhaps the best resource in English on European modernist literature. Hilton Als, Emily Nussbaum and James Wood in the New Yorker, Hannah Black and Rob Horning’s investigations into the networked, commodified self in the New Inquiry, Michael Wood’s At The Movies column in the London Review of Books, Aaron Bady and Sarah Mesle’s fabulous writing on Game of Thrones – the list goes on.

In Ireland, we have Colin Graham’s writing on photography, Mark O’Connell’s literary criticism and Brian Dillon’s catholic interests, as well as younger critics such as Kevin Breathnach and Rebecca O’Dwyer. And with The Irish Times, we have Patrick Freyne, critic of the year at the NewsBrands Ireland Journalism Awards 2016.

Despite their talents, none of these figures gets the kind of mainstream exposure that Berger enjoyed. Berger’s only peer in this regard was probably Roger Ebert, now also deceased. While critics may continue to exist, the conditions that allow them to reach and effect an audience have been eroded. Arts coverage, no matter the medium, is largely reduced to quick responses to what’s new this week. There are exceptions of course, but can you imagine an hour-long conversationbetween John Berger and Susan Sontag being broadcast on Channel 4 today?

Maybe there’s no need to put this stuff on television; isn’t that what the internet is for? But the internet is little more than an endless array of niche interests, algorithmic predictions and quick-hit popularity contests. If we want critics who make the kind of impact that John Berger once did, then we still have to find a place for them on TV screens and in major newspapers.

More importantly, we have to believe that people – ordinary people, sitting at home at night – are interested in nuanced, complex and even difficult art. Only through that will we find someone like Berger, who might help us learn how to look at it.