The Turner Prize winner describes the moment 10 years ago when her pioneering video art took a new, fascinating turn 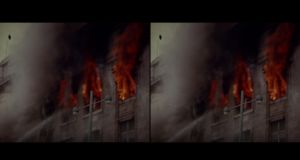 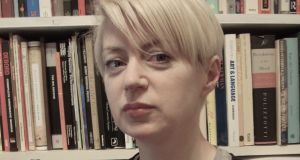 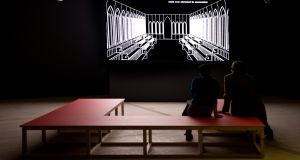 The Woolworths Choir of 1979 (2012) by Elizabeth Price. Image courtesy the artist and MOT International London and Brussels 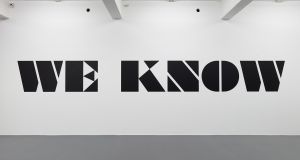 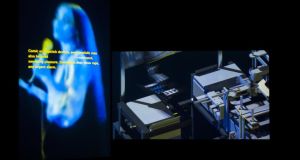 Still from K (2015). Courtesy the artist and MOT International London and Brussels

Elizabeth Price’s The Woolworths Choir of 1979 won her the 2012 Turner Prize. This amazing 18-minute video weaves together three widely unconnected subjects in a gripping, relentless, rhythmic tapestry of images and sound.

A frenetic, illustrated, annotated guide to the choir architecture of medieval churches segues into grainy footage of 1960s girl group the Shangri-Las, and then a detailed, forensic account of the horrific 1979 fire in Manchester Woolworths, in which 10 people died. It’s all seamlessly integrated in a rigorous musical structure that hinges on one visual link: an enigmatic hand gesture that recurs in each setting.

The video is the centrepiece of Price’s survey show at the Model in Sligo, where it is accompanied by a key earlier piece, User Group Disco (2009), which is set in an imagined museum, and a more recent video, K, which juxtaposes imagery of hosiery manufacture with the fictional story of a group of professional female mourners. Also on view are etchings and a wall painting.

In Sligo prior to the opening, Price was attentive to every detail of the almost completed installation, but also relaxed, patient and down-to-earth. This solo show is her first in Ireland. She recalls having work in a group show here in the 1980s, but nothing since.

Price’s reputation as the sort of artist who gives video a good name is well deserved. Taking on a notoriously self-indulgent medium – what could be easier than recording video these days? – she proceeds to put it through its paces. Her videos are not long, and they invariably grip from the off. In some respects they speak the same language as music videos: music, rhythm and dance are all intrinsic to her vocabulary.

They are, however, dense in content and informed by a wealth of research. We know this because Price doesn’t discard the research in pursuit of minimalist purity. Instead, she compresses it, then compresses it again. Images flash by in almost subliminal bursts.

Sixty-plus years on from the French new wave, we are reasonably used to fast cutting and jump-cutting, but Price accelerates the process considerably. That is probably why her videos have a concentrated, sculptural presence and why, immediately after watching one, you want to watch it again. There is just so much to see.

She was born in Bradford, west Yorkshire. Both her parents were teachers and both had Irish connections. “My father, especially, was very committed to the idea of comprehensive schools,” she says, “so we moved to Luton, which had a particularly strong comprehensive.”

Price grew up and went to study fine art at the Ruskin School of Art in Oxford, where in 1986 she was a founding member of five-piece Talulah Gosh. Although relatively short-lived, the indie pop group has earned cult status.

“When I was growing up I’d listen to John Peel, ” she says. “I identified that indie, post-punk music with creative freedom. I saw art as a part of that. But whereas the art world seemed remote and vertically organised, with no way of gaining access to it, you could go and make a record at 18, and your friends would listen to it and even buy it.

“There was that sense of community and possibility about it. And I liked the process of making music, the layering, the building-up of the sound.”

Still, Price left Talulah Gosh after a year. It wasn’t a falling out: “I didn’t like performing.”

She went on to complete an MFA at the Royal College of Art in London and embarked on the business of being an artist. That meant teaching to support her work, which then comprised “objects, installation, photographs, texts”. Price pursued what she calls “a quiet career” of teaching, with regular exhibitions (she was and remains with Chris Hammond’s MOT International), not at all financially rewarding and, ultimately, not creatively satisfying.

About 10 years ago she followed up on an idea she had for making videos. “I thought they’d be seen as mildly eccentric. But what happened was that people who’d liked my work before just went off it. The moving-image art they were familiar with was not like mine.”

In fact, just before Steve Jobs launched the first iPhone, Price came up with a form of art video that anticipated the accelerated, jagged, jumpy, fragmentary nature of personal and cultural communication in the smartphone, digital internet era.

Then, in 2009 and 2010, User Group Disco was included in group shows in Bristol and Leeds, which led to an offer of Price’s first museum show at The Baltic in Newcastle. She says she relished the opportunity. “Through those three shows my career entirely changed.”

The Baltic show brought her a Turner nomination, which she won against some strong competition. Almost exactly one year later, she won the Contemporary Art Society award, a £60,000 commission for the Ashmolean Museum in Oxford. That work, A Restoration, was unveiled earlier this year to a pretty rapturous response.

As an artist, the key moment was certainly her move into video. “I was accidentally making videos, without a plan, and then I found it made sense for me. It was exciting and liberating.”

All the formerly disparate strands of Price’s work were combined in video, not least her musical experience. Not only did it reconnect her with music, but music has been fundamental to the spirit and structure of what she does. And video dispensed with several issues that bugged her, including the use of textual material in artworks.

“Video was a formal solution to dealing with object and text, allowing access to the kind of things that can happen with narrative,” she says. “I wasn’t that concerned with the moving image per se. For me, video is more a kind of publishing medium for the gallery space – with sound.”

So Price lost nothing and gained much. “Before making video, I’d thought reductively about my work. You’re trained as an artist to remove what’s unresolved, to aim for an economy of means. The end result is an artwork that’s nice, elegant but often dull.”

She is clearly a ferocious researcher and gatherer and an obsessive editor. But editing, for her, is not reductive. “Editing offers a way to keep in as much of the material as possible. Rather than reduce it, you can compress it.” The visual density and rhythmic patterning of her videos mean they not only withstand repeated viewings, but virtually demand it. As she observes: “Usually you don’t really get a song the first time you hear it.”

It’s a time-consuming business. She usually completes one work a year. Given that an average piece is 12-13 minutes long, that is, she says, “one minute a month”. She spends long hours in the studio, a mostly solitary occupation. And not just editing: most of her video is shot “in-house”.

“Spending long hours alone is not good for you in many ways,” Price says. “It’s slightly de-socialising.” Yet part of her clearly likes it. As she says with a shrug, “It’s satisfying in that it works.” Although she enlists technical help, she finds she can’t really delegate. “I’ve made attempts, but having someone else in the room changes everything. No matter how much I love them, I have to be alone when I’m working.”

Besides, despite the copious research, Price never knows beforehand how a piece will develop. She doesn’t work to a script: “I only understand what the solution is going to be through the process of doing it”. Which is why, even though the appetite for her work post-Turner is vast, she cannot greatly increase her productivity.

In addition to her solo exhibition, Price is curating In a Dream You Saw a Way to Survive and You Were Full of Joy, at the Whitworth in Manchester in October. It marshals examples of the reclining or recumbent body by artists from Henry Fuseli via Brancusi and the Lumière brothers to Jenny Holzer and Francesca Woodman.

Apart from offering a compelling line-up, the show is a fascinating guide to Price’s thinking and influences. In the meantime, she more than merits a visit to Sligo.

The trouble with Ayn Rand and Zack Snyder’s ‘The Fountainhead’?
6

Angela Lansbury: still a star at 90
7