Derry and ‘We Shall Overcome’: ‘We plagiarised an entire movement’

The civil-rights protest song found a new home in Derry, and now the city's new Museum of Free Derry is forging a fresh link with the home of the civil-rights movement in the US 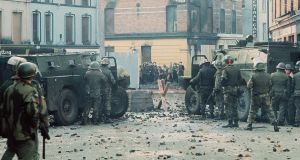 ‘I remember, at the age of about five, standing in the Diamond in Derry and hearing people singing We Shall Overcome. It was sung in a very gentle but very determined way, and, even as a child, I remember the hairs standing up on the back of my neck.”

At the time Tony Doherty, a writer, had no idea of the song’s meaning – or of its new significance as part of the growing campaign for civil rights in Northern Ireland. As people took to the streets in 1968, they carried the song and its message of defiance with them.

It became the anthem of the civil-rights movement, and four years later, on January 30th, 1972, it was We Shall Overcome that echoed through the Bogside as anti-internment marchers protested against the soldiers who had blocked their path.

Within hours 13 marchers had been shot dead, and the body of one of the victims, 17-year-old Hugh Gilmour, lay covered with the bloodstained banner of Derry Civil Rights Association.

It was a defining moment in Irish history – and it is this moment that has provided the inspiration for a new artwork outside the Museum of Free Derry, which tells the story of the civil rights movement and Bloody Sunday.

“It came from a recording of the crowd singing We Shall Overcome on Bloody Sunday,” says Locky Morris, its creator. “I was listening to it on my phone, and the idea of the sound viewed as a waveform came to me.”

The finished artwork, which has been named after the song, is a reproduction of the digital pattern created by the song, cut into a series of weathering-steel panels and displayed along the side of the building.

Morris wanted it to echo the wooden fence that once stood where the artwork stands today, as well as a rubble barricade that blocked Rossville Street, nearby; he also intended it to evoke the barbed wire, burnt vehicles and broken paving slabs of urban conflict.

For Morris the artwork’s multiple meanings are all drawn from the 21-second recording. “That piece of audio contains all the noise and atmosphere of the day. In those few moments in time there was a seismic shift in the whole history of this city.” 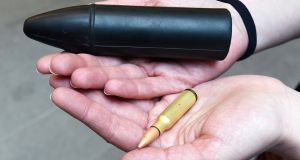 Inside the Museum of Free Derry

As the physical manifestation of this, Morris’s artwork may also have a role to play in reaffirming the link between the civil-rights movement in Northern Ireland and its forerunner in the American south. “We plagiarised an entire movement,” Adrian Kerr, the manager of the Derry museum, says. “We even went as far as stealing the song.”

The ambition now is to use pieces that were left over when the waveform was cut out of the steel panels to create a parallel artwork at Birmingham Civil Rights Institute, in Alabama.

“Not only are we hopefully giving the song back, but we’re also giving back the most important use we had of the song,” Kerr says. “To have that connected artwork at another civil-rights museum, in the States . . . Well, the symbolism of that would be absolutely fantastic.”

Ahmad Ward of the Alabama museum says, “Folks don’t understand how something like a song, which seemed so small at the time, could have such a ripple effect. This song is almost 60 years old, and it’s as important now as it was back then . . .

“It still brings out the same feelings in people. It’s still a call to action. So to have that connection between the folks in Ireland and the people in America, and specifically here in the American south, would be tremendous.”

Doherty, whose father, Paddy, was killed on Bloody Sunday, was a founder member of the Bloody Sunday Justice Campaign and the Bloody Sunday Trust. “When we set up the campaign, in 1992, what we wanted to do was internationalise the demand for truth and justice around Bloody Sunday. That year we had people in Derry from the ANC and a number of veterans from the black-liberation movement in the States. We never saw it as a local event, massive and tragic though it was. We always saw it as part of a national and international struggle for equality and liberation.”

In the 45 years since Bloody Sunday much has changed. The publication of the Saville report, in 2010, brought an apology from the British prime minister at the time, David Cameron, and a public admission of what the families knew all along: their loved ones were unarmed civilians whose deaths had been, as Cameron put it, “unjustified and unjustifiable”.

In the Bogside the Museum of Free Derry is reopening after a £2.4 million redevelopment. “Twenty years ago we couldn’t have built that building,” Adrian Kerr says. “It’s a different time now, because an organisation like ours can get the political and financial support to make something like this happen.”

For many the museum’s very existence is a source of great pride. It also provides a focus for reflection. “I’m one of the generation that grew up through this,” Morris says. “I saw Bloody Sunday with my mum, her holding my hand and saying, ‘You’re not going down there,’ and then afterwards hearing what had happened on the news. There’s a responsibility in all of this that is enormous – and the significance can be overwhelming.

“It’s easy to look at the civil-rights movement in the north of Ireland in isolation, but I think you understand it a lot better when you look at the global context. Similarly, when you look at other aspects of the story, like the state murder of civilians, you should be looking at it in a global context but also a contemporary context. This isn’t just something that happened 44 years ago. This is something that is still happening around the world.”

Ahmad Ward of Birmingham Civil Rights Institute agrees. “We Shall Overcome is something that still has resonance in 2016. We have been wrestling with this race issue forever, and it’s tied into the fabric of America, because there are folks that do not acknowledge that race has played a part in how this country has been constructed.

“We’re still dealing with systematic racism here, which is why you still have the discrepancy in how the justice system works and how black people are seen as being untrustworthy. That’s a hard thing to fight if not everybody sees that as a problem.”

Doherty adds, “We have our own struggles here for equality, and through We Shall Overcome we’re reconnecting with the ongoing struggle in America for civil rights. The Black Lives Matter movement very much encapsulates what the song is about, because in the almost 60 years since it was first sung black lives still don’t appear to matter to the police or to the government in the States.

“I’m sure whoever wrote that song would never have imagined that it would transport itself from the southern states of the US to Ireland in the 1960s, and I know that, when I first heard it, I had no idea that one day I would be involved in transporting the song back across the Atlantic.

“In that sense it represents how far the Bloody Sunday campaign has come, how far Derry has come, and how far the world has come.”