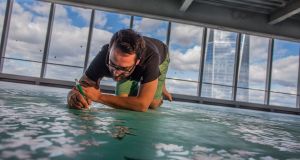 In Lower Manhattan new skyscrapers have risen around the pair of reflecting pools marking where the Twin Towers stood at the World Trade Center site. At almost an acre each, the pools are poignant, to the degree that Irish artist David Uda found himself becoming frustrated at the selfie-taking crowds thronging the area. “It didn’t feel right,” he says.

It was a feeling that grew as he spent more than six weeks at the site, painting a memorial floorpiece on the 69th floor of 4 World Trade Center, at the invitation of one of New York’s largest commercial landlords, Silverstein Properties. So what brings an Irish artist to the attention of a multibillion dollar development company, and what is it doing hiring 30 street artists to have at the walls (and floor) of such a prime piece of real estate?

Dark-eyed and dark-haired, Uda is an interesting and endearing combination of incredibly laid-back and extremely restless. He’s on the move all the time as we speak, shifting in his seat, leaning forward to gesture, reaching to touch the torn knees of his paint-splattered jeans. And yet he’s also calm to the point of casualness about the world opening up to him.

For Uda, who signs himself Duda, 4 WTC was a piece of serendipity that unfolded in one of those roundabout ways that so frequently characterise strokes of luck. His Dublin gallery, Sol Art (solart.ie), had brought his bright bold canvases to the Affordable Art Fair in New York where they had been spotted by Doug Smith of the World Trade Gallery (wtgallery.com). Fast forward to fellow Irishman Dara McQuillan dropping some art works into the gallery for framing and liking what he saw (“Would they [the artists] be interested in a bigger space?”, he asked at the time, in an epic understatement), and the scene is almost set.

McQuillan, who is chief marketing officer at Silverstein, says the art is a logical move. “Our mission is to rebuild the World Trade Center and to do it in a way that represents the best of New York. And New York is a very creative space.” He describes the reaction of the artists at the opportunity to paint “one thousand feet up in the air, with some of the most spectacular views in the world” and of the potential tenants who came to see the space. “They immediately got a sense of the possibilities.” The experiment has worked to such a degree that music site Spotify has taken the floor, and plans to design its workspace around the art – but that’s getting ahead of the story.

“The Sol was doing a fair in Chelsea and we decided we’d go over,” Uda remembers as we chat at his Dublin home, adjacent to his small canvas-filled studio in which paint and resin drip from the walls so that the studio is almost an artwork itself. “We ended up going on the tear one night and I woke up next morning with my phone battery dead. When I charged it, there were 36 missed calls and a load of text messages: “Be at the World Trade Gallery at 3pm. And bring your passport.”

Uda duly arrived and was taken to tower four and up to the 69th floor where some of the biggest names in street art were already using the vast walls as their canvasses. “It looked like all the walls were taken,” he recalls. So, thinking he had just been invited to see what other artists were up to, he headed for the lift to go back down. “They called me back,” he remembers, smiling wryly.

In the end Uda opted to use the floor. Seeing that none of the other artists had made any reference to 9/11, he came up with a commemorative work. “The idea was already forming in my head as we were on our way out,” he says. “I had asked how many people died, so I realised I needed to have a memorial piece. I went, for want of a better word, for the jugular.”

That said, his “jugular” piece, Bloom, is a calm and beautiful circle containing 2,606 painted flowers, in green and white with a yellow patterned surround. “I wanted something peaceful, to go against the brashness,” he says simply.

His name is courtesy of his Sardinian roots. Sliding his first-name initial together to come up with “Duda” came about, he says, when he realised his second name was rather too close to the initials of one of the Loyalist paramilitary outfits. His path to art has been roundabout too. He studied at the Grafton Academy (“I had lots of fun designing clothes”), and won Young Fashion Designer of the Year in 2000. “Then I spent a few years finding myself,” he says and smiles winningly. “Having the craic.” A stint in retail followed, then he worked with Catapult, the events company, a job which came to an end with the recession. “That ending was the best thing that ever happened,” he says.

He had been making art and that Christmas got commissions from friends and people in the know. “After that, I realised it was what I wanted to do. I feel really humble,” he says, leaning forward, “and so lucky to do what I want to do and that makes you do more.” Not many artists get to paint in a spot such as the 69th floor of WTC4. “It’s a 360 view of Manhattan,” says Uda, smiling at the memory.

“Every day it was sunny, every day I got an unbelievable sunset behind the Statue of Liberty. And I was getting to know the security guards, and meeting all the guys from the area who were there when it happened.” He describes meeting “this amazing dude called Chuck, who worked in the World Trade Center when the aircraft hit and he lost a load of his friends. He came up and saw it [Bloom], and for me that was the point and the reason.”

Does it make a difference when street art happens in buildings, with the blessing of corporations? Uda doesn’t think so. “It’s a style, street art is fine art. Street art is today’s pop art.”