EVA International is a reflection of our ‘current moment’, says curator Bassam El Baroni, with echoes of our not-so-distant future in venues including a post-industrial Limerick space 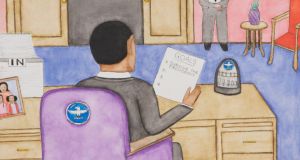 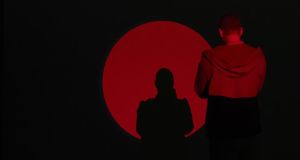 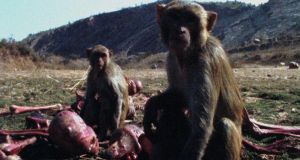 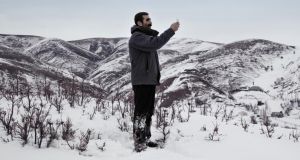 From the series ‘Open Phone Booth’ by Nilbar Gures 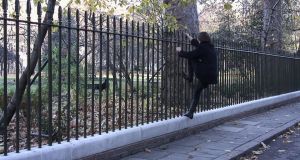 ‘Guest’, a 2008 video by Catalina Niculescu. Photograph: courtesy of the artist

The curator of this year’s EVA International, Bassam El Baroni, is a quiet, thoughtful Egyptian who was born and lives in Alexandria. From this vantage point he surveys a world in varying degrees of unrest, starting with his own country and expanding in ever-widening circles to encompass most of the globe. The title he has chosen for his exhibition, Agitationism , gives a clue to his thinking.

He has in mind the old philosophical sense of the term “agitation”, as denoting “the extreme tension of the brain in its attempt to determine something perceived as previously undetermined”. The contemporary moment, he suggests, is “a kind of palimpsest of half-undone histories, half-imagined futures, and a present of phantasms.”

EVA is Ireland’s biennial of contemporary art. The invited curator does not take it on as a blank slate: a body of work arrives via open submission, which the curator has to tackle, choosing pieces for inclusion. Other artists can be invited to participate. El Baroni took this on board very deliberately. In sifting through proposals, he was “looking for responses to the current moment in general” – responses that allowed him to develop several related threads to the show. What we see in EVA, he argues, addresses the ways we work through “our relationships with historical ideologies, postcolonial narratives, other forms of life – animals, for example – and speculations about the not-so-distant future”.

While there are several venues, the bulk of the work is in just two: the Limerick City Gallery; and a post-industrial space, the former Golden Vale milk plant on the west bank of the Shannon. The buildings of the latter, deserted and slightly down-at-heel, are extremely atmospheric and huge, a bit like the Arsenale in Venice. They have a rough, even raw texture.


Jolley and Beech are key
There are more than 50 artists, although El Baroni mentions two as being absolutely key to his selection: the late Paddy Jolley and the LA-based Amanda Beech.

Jolley, a gifted artist with a dark vision, died suddenly in January 2012. His estate submitted This Monkey , a film he made in 2009. It was shot in India, and is based on the close relationship between humans and rhesus monkeys and, typically for Jolley, it builds to a casually macabre climax. “It is,” says El Baroni, “an inspirational work. It led me to look to specific artists who made work with animals, with birds [Miri Segal’s interactive parrots], for example, or dogs [Hassan Khan].”

Beech teaches critical theory as well as making artworks, and there is an overlap or a continuity. El Baroni likes her writing and her political position “as much or even more than the work itself”. On one level, her three-channel video, Final Machine , is easy to get. It plays out its diverse elements with the relentless pace of a thriller, with a touch of music-video pacing thrown in.

Beech’s ambition is nothing less than to achieve in her work a new, speculative realism that manages to evade the existing structures of cultural and political systems that are deeply embedded in our everyday politics and art. That may account for a certain didactic tone. Though how can we tell if she has managed to slip the bonds of the ruling order, especially as she resides so firmly within it, as dean of critical theory at the California Institute of the Arts?

There’s didactic, then there’s the classroom, complete with desks and lamps, installed by Jeffrey Charles Henry Peacock (the collaborative identity of two individuals). It’s part of Scabs , an analytical exploration of Gustave Courbet’s painting The Stonebreakers (1849-1850), together with drawings of what manual labour is in the contemporary world.


Michael Patterson-Carver’s politics
As with Beech, El Baroni likes the political position of American Michael Patterson-Carver, something of an outsider artist, who makes delicately precise watercolours of protests, rallies and other political subjects. “It’s rare these days for an artist to be so clear in terms of political leanings. But he does it with a kind of playfulness that is very appealing.”

A two-screen video installation by Zachary Formwalt, In Light of the Arc , documents a stage in the construction of the stock-exchange building that Rem Koolhaas’s Office for Metropolitan Architecture designed in China’s first Special Economic Zone, Shenzhen. Formwalt details the grandiose physical infrastructure that underpins the intangible, abstract play of capital in the financial markets. The work is part of a trilogy that elaborates on the theme and is both smart and thought-provoking. His is, it could be said, another key exhibit in El Baroni’s show.

More figuratively, Cécile Hartmann’s agreeable ambient video Kessoku (Covenant) parallels fluctuations in financial markets with the action of unseen, underground and undersea telluric electrical currents. If you climb that stairs in the City Gallery to get to her work you will encounter a racial slur from Luis Camnitzer: “All those who can’t read Irish are stupid.”

Cultural fault lines emerge as a preoccupation in several other works as well, including Turkish artist Nilbar Gures’s Open Phone Booth/Identity , a series of colour photographs documenting various people talking on phones on a hilltop, a beautiful but conspicuously impractical setting. They are villagers in East Anatolia, whose cultural identity has led to their being left outside any phone network. To get a weak signal they have to climb into the hills, winter and summer.

In their series of photographs with accompanying comments, Benjamin de Burca and Barbara Wagner also delve into Brazil, documenting the gradual undermining of a law decreeing that a three-dimensional artwork had to be included in planning for larger residential dwellings. One thinks of Irish motorway sculptures.

Neša Paripovic made a short film in Belgrade in which he traces a path across the city in a random, unorthodox way, climbing walls, passing through back gardens, clambering over obstacles, nonchalantly taking time out to brush himself down and smoke a cigarette. It’s a charming, anarchic work that anticipates the contemporary sport of free running.

Catalina Niculescu’s Guest , made in 2008, has a comparable premise. In it we see her trying to negotiate a succession of urban obstacles. She, however, is constantly thwarted in her efforts by security guards or sheer physical difficulty. El Baroni juxtaposes the two films. “It’s about our capacity to exceed boundaries. I think what emerges is the idea that we live in more regulated states now.”


Work around Limerick
A significant number of artists from abroad have spent time in Limerick and made work in context. Swedish artist Ann Böttcher has made intricately detailed drawings of yew and cypress trees around St Joseph’s Hospital. GRRRR (Ingo Giezendanner) travels constantly and documents his itinerary in drawings. He spent time exploring Limerick to produce numerous drawings and murals incorporating animated elements. Ann Sofi Sidén has created a mixture of documentary and drama around a local pub, Costello’s Tavern.

There is a profoundly international – though not quite global – flavour to EVA, and plenty of substance. Virtually every piece and project included makes a good case for itself. It is very well-balanced overall but, as with every contemporary art show these days, it includes a lot of video and film material. For the visitor, that takes time. Most of the videos are fairly short. Even Eva Richardson McCrea’s dense film version of Alain Badiou’s play The Incident at Antioch is only 21 minutes long, and well worth seeing. Final Machine is one of the longest at 45 minutes.

El Baroni was determined to make the show user-friendly, and the concise guide is very clear and informative, with detailed maps and diagrams and a brief summary of every work with biographical information on the artists.

EVA used to be an annual exhibition. The move to a two-year cycle has, says director Woodrow Kernohan, been beneficial in numerous ways, allowing time to source funding, for example (although, in international terms, it still functions on a shoestring). Still, there are no fewer than 20 funded, commissioned projects this year, which bodes well for the future.