‘The Irish Times’, the Royal Irish Academy and a panel of experts chose a single Irish artwork for each year from 1916 to 2015 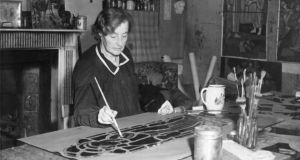 Studio session: some years were creative deserts. Others saw the creation of a number of significant works: Finnegans Wake, by James Joyce, and My Four Green Fields, by Evie Hone – shown at work in 1952 – are both from 1939. Photograph: The Irish Times

Over the next two years, Modern Ireland in 100 Artworks, which begins today with a profile of James Joyce’s ‘A Portrait of the Artist as a Young Man’, will assess the creative output of modern Ireland from the revolutionary period to today.

Modern Ireland in 100 Artworks is a collaboration between ‘The Irish Times’ and the Royal Irish Academy. A panel of experts convened by the academy has chosen a single Irish artwork – book, painting, sculpture, play, poem or building – for each year from 1916 to 2015. Every Saturday Fintan O’Toole and panel members will profile one of these works in ‘The Irish Times’, finishing, in late 2016, with a work from 2015.

The 100 artworks will be drawn from the literary and visual arts. We will not neglect other areas of creative endeavour, however. As the project progresses we will also periodically include separate strands on 100 years of Irish music and song, Irish humour and Irish film.

The number of core genres has been kept deliberately small, but there were still keen debates between and within the panels.

And choosing one work for each year gave the series a simple structure but also threw up problems. Some years were creative deserts. Others saw the creation of a number of significant works, such as James Joyce’s ‘Finnegans Wake’ and Evie Hone’s ‘My Four Green Fields’ in 1939. Choosing was not always easy.

It was a relief when the panel members could agree on a work that encompassed both literary and visual genres, such as Thomas Kinsella’s translation of the Táin, in 1969, with illustrations by Louis le Brocquy.

The final artwork in the series – from the year 2015 – has not been created yet. As the project draws to a close we will ask ‘Irish Times’ readers to help us select from that year a creative work that deserves a place along with the other 99. So what begins today as a historical project can become a discussion about the arts in modern Ireland.

Readers can take part in the series each week. Every article will list other works considered for that year and invite online comment on the merits and demerits of the panel’s choice.

All 100 profiles will be collected on irishtimes.com, along with images, reader debates and related articles.

This is the second such collaboration between ‘The Irish Times’ and the Royal Irish Academy, which previously coproduced the newspaper series and book ‘A History of Ireland in 100 Objects’.

You can get more information from the Royal Irish Academy’s Dictionary of Irish Biography, at ria.ie

Cancel culture: can you defend people who say unpopular things?
6