We will always have the great poet. We have lost an exemplary man 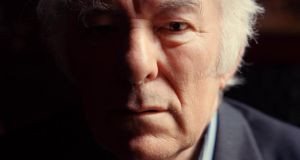 Like all great poets, Seamus Heaney was an alchemist.

He turned our disgrace into grace, our petty hatreds into epic generosity, our dull clichés into questioning eloquence, the leaden metal of brutal inevitability into the gold of pure possibility.

He lacked the arrogance to tell us who we are – much more importantly, he told us what we are. He reminded us that Ireland is a culture before it is an economy. And in the extraordinary way he bore himself, the dignity and decency and the mellow delight that shone from him, he gave us self-respect.

In The Tempest, Miranda exclaims “O brave new world, / That has such people in it.”

Seamus Heaney made us gasp in wonder that, for all its follies and terrors, Irish culture had such a person in it.

He was out and about again this spring and summer, reading, opening, presiding, blessing. After he suffered a stroke in 2006, he had cut down on his public engagements, resisting the incessant clamour for his presence. But this year he seemed happy to be a public man again.

He had something to convey – especially, it seemed, to his fellow citizens. It was what his whole life as a poet had articulated with such astounding eloquence. In a speech at the National Museum in March he put it directly: “We are not simply a credit rating or an economy but a history and a culture, a human population rather than a statistical phenomenon.”

No one did so much to make us feel like creatures of a long-working imagination rather than figments of a short-term market.

Great poets speak for themselves but they also create the voices through which something beyond themselves finds articulation. What Heaney articulated, above all, was the way in which – in the words of his friend Brian Friel – confusion need not be an ignoble condition. He grew up in a literally divided landscape – “the lines of sectarian antagonism and affiliation”, he wrote, “followed the boundaries of the land” — and lived through the hopes and horrors of the Troubles.

Conflicting impulses
He was drawn to both Irish and English poetic traditions. He also lived through the death of the ancient rural world into which he was born and the emergence of a globalised modern Ireland. He struggled with contradictions, paradoxes, conflicting impulses.

His genius lay in his ability to hover between them, to give each side of a political or emotional equation its full weight and proper due without becoming the prisoner of either. WB Yeats, the poet whose influence he both absorbed and transcended, wrote in a time of Irish violence that “we are closed in and the key is turned/ On our uncertainty” .

Heaney told us that, though we are indeed fated to uncertainty, it need not necessarily be a locked room in which we play out the same scenarios of doom over and over. Uncertainty may simply be the human condition. Heaney humanised uncertainty, made ambiguity rich with possibilities. As he put it in the beautifully homely metaphor of Terminus:

“Two buckets were easier carried than one.
I grew up in between.”

He was not, in that sense, a national poet. He knew too much about the dangers of tribalism and the foolishness of slogans to ever want to be a spokesman for the collective. He would have agreed with Yeats’s dictum that “We make out of the quarrel with others, rhetoric, but of the quarrel with ourselves, poetry.”

In Heaney’s The Flight Path, an IRA sympathiser has his demands for political commitment refused:

“When, for fuck’s sake, are you going to write
Something for us?
If I do write something,
Whatever it is, I’ll be writing for myself.”

But that self was never selfish. It was always open, sensitive, attuned to the signals emanating, not just from nature and memory, but from politics and history too. With the outbreak of the Troubles, as he put it, “the problems of poetry moved from being simply a matter of achieving the satisfactory verbal icon to being a search for images and symbols adequate to our predicament”. This was his lifelong quest – for images and symbols adequate to the predicament of being alive in his own time.

What forced him to be great, what kept him on his mettle, was that this quest was for him a very hard struggle. His world, the world of his childhood to which he returned so often and with such breathtaking clarity of recall, was archaic: farmers ploughing with horses, thatchers making roofs from rushes, diviners finding hidden sources of water, blacksmiths working in their forges. He could have lived imaginatively only in that world, as a nostalgic romantic, purveyor of hand-woven verbal tweeds. He fought instead to make his art contemporary, to put it under the pressure of its times.

He was often racked, indeed, by a sense that this art was in fact inadequate. The image of his cousin Colum McCartney, murdered in a sectarian attack, haunted him: “blood and roadside muck in your hair and eyes”.

But he knew too that there was an immense human value in the act of writing with infinite care and utter honesty, in the way poetry acts as an antidote to the murderous clichés of slogans and rhetoric. Heaney recalled of himself and his fellow Belfast-based poets in the early 1960s that they were buoyed by a belief “that the tolerances and subtleties of their art were precisely what they had to set against the repetitive intolerance of public life.”

That belief may have seemed naive in the bleakest years of the Troubles but in the longer perspective of history it was vindicated. It was not accidental that, when politicians reached for a language adequate to the unfolding of new possibilities for peace, they took Heaney’s “hope and history rhyme” off the shelf again and again. The poet in Heaney was surely wearied by hearing his new-minted phrase worn away into cliché, but the citizen in him would have regarded the sacrifice as well worth making.

Great citizen
The great maker of such phrases will not be lost, for he is among the immortals now. But the great citizen, the exemplary public man who gave a gentle gravity to our small affairs, who blessed our ordinary days with intimations of the extraordinary, is a devastating loss to Irish life. We can take comfort where we will best find it: in his own luminous poems. There we will find a recurrent imagine of marks that have been erased in physical reality but go on existing.

He wrote of “the dotted line my father’s ashplant made on Sandymount Strand,” a line long-since washed away but visible to his mind’s eye. He wrote of boys continuing to play football after the light has faded and the lines of the pitch have become invisible:
“Youngsters shouting their heads off in a field
As the light died and they kept on playing
Because by then they were playing in their heads...”

Seamus Heaney’s grace will play in our heads long after his earthly light has faded.

1 Midlands lockdown: Movement restrictions in place for residents of Kildare, Laois and Offaly
2 Coronavirus in Ireland: Four more deaths and 98 new cases reported
3 Main points: What restrictions have been imposed on Kildare, Offaly and Laois?
4 Masks Q&A: Who has to wear them in shops and what happens if you don’t?
5 Food myths busted: Are coffee and salt so bad for us? Are calorie counts worthwhile?
6 Scarlet for ya: Paul Mescal does classic Connell in The Rolling Stones’ new video
7 Ireland's 'R number' of almost 2 a 'serious concern' as number of new cases jumps
8 Officials refuse to rule out ‘Midlands lockdown’ following Covid-19 surge
9 Covid-19 nonsense peddled by celebrities needs to be challenged
10 MSD buys Takeda biologics plant in Dunboyne
Real news has value SUBSCRIBE