Zero-hour contracts could be banned under proposed reforms 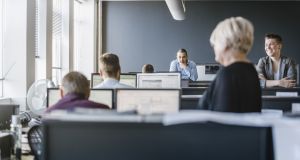 Under recommendations from the expert group employers would have to give individuals at least 72 hours notice of being called into work. Photograph: Getty Images

Employers would be banned from offering less than three continuous hours of work to employees under new labour market reforms to be considered by the Cabinet next week.

The report of an expert group examining the extent of zero hours and low-hours work, which was commissioned by Minster for Business and Employment Ged Nash, will also recommend safeguards be introduced to prevent workers from being called into work or having previously-scheduled work cancelled by employers at very short notice.

Under the recommendations employers would also have to give employees on their first day in the job a contract which provided a true reflection of the hours they would be expected to work.

The group also recommended that these proposed new rules could be suspended in specific sectors if there was a collective agreement between trade unions and employers setting out alternative arrangements.

If Cabinet gives approval, it is envisaged that Mr Nash will establish a relatively-brief public consultation process on the recommendations of the group with a view to bringing reform proposals of his own to Government early in the New Year.

Any introduction of a minimum of three continuous hours of employment could have significant implication in the education and social care sectors.

The report, which was drawn up by a team in the University of Limerick, found that classic zero-hours contracts – under which employees are contractually obliged to make themselves available for work with an employer without any guarantee of receiving any – “are not extensive in Ireland”.

The report estimated that 10 per cent of the workforce in the community care sector – dealing with the provision of homecare for older people and services for those with an intellectual disability were on “if and when” contracts.

It estimated that 5.3 per cent of employees in Ireland – about 100,000 people – have constantly varying working hours. But only a subset of these would be on “if and when “ contracts.