Tech firms offer bewildering free perks: but do they work? 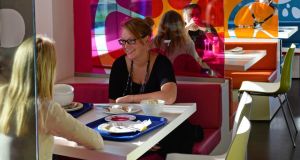 The best things in life may be free but are generous workplace perks enough to persuade you to choose one company over another? That’s certainly what the likes of Google, Facebook, Netflix and Apple hope.

While most of us think we’re doing pretty well if we’re given a decent health-care package, access to a coffee machine and gym membership, there are others who find themselves inundated with freebies and fringe benefits that all help make life a little easier.

From free food and regular “on-the-house” visits from barbers and masseurs, to onsite childcare, concierge services and generous parental leave and holidays, the list of goodies on offer seems to be endless. Indeed, Facebook even announced last year that they would reimburse female employees up to $20,000 (€17,560) for freezing their eggs.

With competition for talent at an extreme among tech firms, many have taken to offering a dizzying array of tasty treats in order to win people over. The payoff, according to Google at least, is lower attrition rates, higher employee satisfaction, increased innovation and productivity, and fewer days out sick.

“We work hard to create the healthiest, happiest and most productive work environments possible to help people work at their best and inspire wellbeing among our employees. This includes food, wellness and fitness-related benefits. Providing the right benefits improves productivity, drives innovation and supports retention,” Susanne Whyte, EMEA benefits manager at Google told The Irish Times.

Other industry sectors have taken note and, while few are providing anywhere near as good a proposition, there’s no doubting that freebies are increasingly being seen as important in the battle to win the best workers.

There was something of a surprise then when Ryan Smith, co-founder and chief executive of the US software firm Qualtrics, dared to suggest recently that giving away things for free might not be as effective a recruitment tool as you’d imagine. Given that the company has a full-service pub at its Dublin office, where it is on schedule to have 250 employees by the end of 2016; this might seem an odd thing to say.

In an opinion piece in Fortune magazine in June, Mr Smith said that, with all the free stuff on offer, most workspaces are increasingly looking like playgrounds.

“Free food, open office space, and bringing pets to work have become somewhat standard in the tech industry. Many people think that if your office doesn’t resemble Disneyland, you’re doing something wrong,” he said.

Referring to a recent study carried out by Qualtrics however, he said that while his company had joined others in trying to create workspaces that give employees a break from routine and encourage interaction, on-site benefits are largely ineffective when it comes to winning hearts and minds.

That survey, which focused on recruiting, engaging and retaining so-called “Millennials” (those born between the early 1980s and 2000s), showed that free food was considered one of the least important elements of company culture.

“Sure, catered lunches might boost employee morale once in a while, but it’s a losing strategy if you’re trying to help your employees feel like they’re an integral part of a thriving organisation. If you really want to establish a company culture that facilitates higher engagement and retention, unlimited snacks and an on-site gym aren’t the answers,” he said.

Smith goes on to suggest a number of ways in which companies can and should appeal to staff, including showing opportunities for career growth, a focus on good management and an ever-changing fluid environment that gives employees opportunities to switch and change.

“How do you manage Indiana Jones? Channel his energy and talents. Give him big problems to solve and remove obstacles from his path. Make his work and experience worth sharing and not just a job to be done. Mentor and do not micro manage,” said Des Martin, head of growth EMEA at Qualtrics in Dublin.

Martin said employees would rather be paid less and have a better chance of finding happiness from work than being richly rewarded for a job they loathe.

“An interesting finding from our study was that 64 per cent of Millennials would prefer to make $40,000 (€36,000) in a job they love than $100,000 (€91,000) in a job they find boring. This means that free food and perks are a small part of company culture and the employee experience. It is far more important to create an environment where Millennials feel supported and challenged. Millennials want to move away from the traditional office and spend their working day in a more fun and stimulating environment,” he added.

Annette Clancy, a lecturer in organisational behaviour at UCD School of Business, also has her doubts about the effectiveness of offering free stuff in order to attract and retain staff.

She notes the research carried out by Dan Ariely, professor of psychology and behavioural economics at Duke University in North Carolina, which shows that we tend to attribute more value to things that are free, to the degree that it can encourage us to make foolish decisions that we may later regret. Clancy stresses however, that while free can be tempting, it only goes so far.

“There is a seduction value to things that are free but of course after a while even things that don’t cost anything become normalised and can seem like less of a perk,” she said.

“Are free sandwiches every day going to give you the same kind of buzz after you’ve been with a company for two years? Probably not. We lose the notion of free over time and it just becomes part and parcel of the contract.”

Clancy also questions the notion of what “free” really means in the context of employment.

“As we all know, nothing is ever really free. Underneath the perks is the issue of reciprocity – what’s being offered is being given because there’s an implied contract in it and part of that is that you are our employee and must stay with us,” she said.

“There’s a dark side to it all involving manipulation and guilt. Employees are encouraged to not leave the office and to stay late on campus because everything is free and there’s so much fun happening. The line between working and home life can easily become blurred in this scenario, making people feel guilty about leaving,” she added.

Martin is sceptical about this, reiterating that free stuff will only take you so far.

“People are still at liberty to eat out of the office if they wish. Focusing on perks misses the point.

“There is a talent war in the tech industry at the moment and a free lunch will not get employers very far. Those companies that are winning are focussed on creating collaborative environments where teamwork and mentorship is prized over the older model of the individual contributor,” said Martin.

On this, Clancy agrees. “Perks are the icing on the cake and that’s all they are. You may want to join a company because they have a fabulous social life, free sandwiches and so on but if career progression isn’t in place, if the salary isn’t right, and if there’s not a good management structure, then perks are not going to be a substitute for that,” she said.