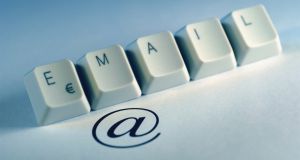 Fortunately, in newspaper columns you can still say what you think. In email it is no longer possible. Photograph: Getty Images

When Ray Tomlinson, the man credited with the invention of email, died 10 days ago, all sorts of people saw it as an excuse to complain about how his creation has messed up our office lives. It has prevented us getting things done, fried our brains and taught us to go on working even when in bed.

I have a different accusation to level at email – it has made us all passive aggressive. It has encouraged us to sulk, to be falsely polite, sneaky and obstructive. It has stifled debate and made office life more stultifying and aggravating than it has ever been.

Last week I sent a longish, careful message to someone who had come up with a proposal I didn’t agree with. All day I heard nothing, and then when I was at home making supper that evening, my phone bleeped.

The reply consisted of one word: “Noted”. This was the perfect passive-aggressive response. It was just about polite enough for me to have no legitimate grounds for complaint. It shut down the discussion, and left me with only one sensible course of action – to pour myself a large glass of wine and seethe.

Email alone didn’t make the office passive aggressive – we were going that way anyway. It all started a couple of decades ago, when the four great forces of modern office life – political correctness, HR, PR and litigiousness – ruled that it was no longer acceptable to lose your rag. As working life remained at least as enraging as it always was, all anger, resentment and hostility were pushed underground, re-emerging in the even nastier form of passive aggression.

At around the same time, we were introduced to email. At first, we saw it as a way of venting the rage that we could no longer show in person, and sent each other furious rants in block capitals.

After a bit, people realised there was a problem with this. Anger doesn’t usually last but an angry email lasts forever.

Now anyone who shows even the slightest ill humour in an email is deemed to have done something far less socially acceptable than breaking wind in public. They are likely to be punished by having their rage exposed and shared by everyone with an internet connection.

While email is ill-suited to overt rage, it is perfect for communicating hostility passively, without getting caught. The first trick is silence. This is the easiest, most deniable and most effective passive aggressive ploy there is. All unwelcome emails can be simply ignored. Someone wants you to do something? Don’t reply. A difficult to write email? Don’t write it.

The upshot of so much silence is devastating. Far from speeding work up, it slows it down. It means that the most comforting axiom for office workers – “no news is good news” – does not apply any more. Now no news could be very bad news indeed. Maybe you are about to be fired. Or maybe the person is just busy. You will never know, so you will always worry.

Failing silence, the next best passive aggressive trick is extreme brevity, of the sort I was subjected to last week. Noted. Okay. Fine. Thanks. Again the hostility can always be denied. Maybe the person genuinely thought your message was fine. Or maybe they hate you. Not knowing is not pleasant.

Copying bosses into emails is a gift for passive aggressive workers everywhere. In the old days you had to go out of your way to grass someone up, but now all it takes is two innocuous little letters: “cc”.

Passive aggressive email is also perfect for passing the buck. It is no longer acceptable to say “do so and so” to a colleague – as we all have to pretend everyone is equal – which means power is exerted passively by ending emails with “thanks in advance” or “I’ll leave it with you”.

Even more annoying are emails that end, “Happy to discuss”. This almost certainly means: “there is no point in discussing as the decision has been taken”. Worse, is “Let me know if that makes sense”, which might be straight or might mean “You’re an idiot. I have no interest in what you think.”

Although all passive aggressive messages are by nature deniable, a good trick for spotting them is when they come with unnecessary politeness. The more someone admits to being “a little surprised” the more incandescent they probably are. When a sender who usually signs off with the uncharming “rgds”, types out “with my very best regards”, you are almost certainly in trouble.

Sometimes it is possible to respond to passive aggression in kind. I have recently been ignoring a request to do something, which prompted first “a gentle reminder” and then the gloriously passive aggressive question: “Is your internet down?”.

In case the sender is reading my column, let me assure her that it’s not down. I just don’t want to reply. Fortunately, in newspaper columns you can still say what you think. In email it is no longer possible.

Pilita Clark: I have never been entirely on board with working from home