Though you could always unload the dishwasher while you’re hanging on the line . . . 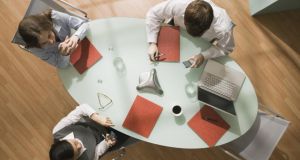 If something is important enough to have a meeting about, then a table must be found and people must travel to sit at it. Photograph: Getty

At 10.30am one day last week I got a reminder on my phone saying that at 11am I had to join a conference call. I spent the next 30 minutes mildly dreading it, and then at 10.59 dialled the number, put in the six-digit pin, and gave my name, as instructed.

“You are the first person joining the call,” said an electronic voice. I then listened to the William Tell Overture until I heard a robotic “Simon X has joined the call.” Two seconds later someone called Katie joined. I had no idea who either of them were, but said hello.

“What’s the weather like where you are?” Simon ventured. We proceeded to make the world’s most desultory small talk, interrupted by every new arrival, each one necessitating a fresh discussion about who was on and who wasn’t.

Fifteen minutes after the call was meant to start, it finally got going. Various people spoke about a management symposium we are all due to be talking at next month. When it was my turn, I waffled for a bit, pretending I had already worked out what my talk was going to be about.

Someone gave a guffaw, though I could work out neither who it was nor whether the laugh suggested approval or disdain. Then the organiser talked for some time about special dietary requirements, microphones and lecterns.

At 11.54 it was over. Eight people in three time zones had wasted the best part of an hour on an exchange that could have been done in three minutes by email.

It is not hard to see why conference calls sound such a great idea. Business is global. People are not in the same place. Anything that allows them to have meetings without travelling has to be a good thing.

Neither is it hard to see why they can never work. To hold a meeting where you can never be sure who is talking – and often can’t hear them anyway – and where no one has done any preparation because they know they won’t get rumbled is to guarantee a discussion of the lowest possible order.

Add to that sounds of dogs barking in the background and children being got off to school, because no conference call is ever complete without someone who is a stranger to the mute button, and it can only end badly.

Far from making the world seem smaller, the conference call makes it feel bigger. The people who are hanging on the line when a hard core are together in the meeting room do not feel included. They feel second-class citizens, who are impossibly far away.

It is no surprise that everyone hates them. There is a funny sketch by Tripp and Tyler sending up the conference call that has been watched 11 million times on YouTube; I watched it again last week but didn’t laugh. It was too near the knuckle.

What is surprising is that these virtual meetings go on happening. I seldom give a speech without having to endure a conference call in advance. A friend who works for a large global company tells me that every day two to three hours are given over to them but in 10 years she cannot remember a single useful one.

Email is often said to be the bane of modern office life. But conference calls are surely worse. Emails can be ignored while a conference call puts one at the mercy of people gabbling away interminably at what is often an unsociable hour.

In a way this is an improvement, as at least you know who is talking, but it has the drawback that you can no longer attend from the gym or naked in bed. Worse still, you can’t do the only sensible thing when on a conference call: get on with your emails or unload the dishwasher.

The main reason such conferences go on existing is political. Managers can cover their backs by saying they held a meeting in the knowledge that the format is too hopeless to produce a resolution.

Which leaves them free to impose whatever unpopular action they were planning in the first place. There is only one sort of conference call that should be allowed. It involves three or, at a stretch, four people who already know each other and who need to agree on something specific. It makes sense for example for an editor, a writer and a libel lawyer to have a conference call to discuss how best to keep out of jail.

Otherwise there should be a rule. If something is so important it needs to be chewed over at length by more than four people, then a table must be found and people must travel to sit at it. If it is not so important, then the meeting ought not to take place at all. – (Copyright The Financial Times Limited 2015)

10 Cartoon Saloon boosted by deals with Apple and Netflix