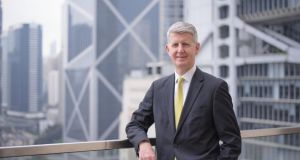 When Mervyn Jacob left Ireland in 1986, he didn’t expect to end up with a ringside seat to the opening up of the Chinese economy. But having spent most of his professional life living and working in Hong Kong with PricewaterhouseCoopers (PwC), he’s not only ended up watching the drama unfold, but also played his part in helping it to happen.

Having moved away to Sydney at 26 to sample life in Australia, Jacob planned to stay there for a few years before returning home, but a trip to Hong Kong convinced him that his future lay there instead.

A quarter of a century later, he’s still based in the city and enjoying life as much as he did on his arrival.

“One of the things that appealed a lot to me when I joined what was then Price Waterhouse Craig Gardner in Dublin was that they had sold themselves as a company that would allow employees to travel and work abroad.

“That was very attractive to me and, given that the situation was pretty grim in Ireland at the time and opportunities were fairly limited, I jumped at the chance of being able to go overseas,” he said.

“I initially went to Sydney for two years and loved every minute of it. What’s more, it really piqued my interest in working in Asia. On one of my visits back home to Ireland, I stayed with a couple of friends in Hong Kong who told me to pop into our local office there as they were hiring. I was asked if I could start immediately, but it was nine months later before I could move over. I’ve been here ever since.”

As a partner and leader of PricewaterhouseCoopers China and Hong Kong financial services assurance division, Jacob has amassed plenty of experience advising on the risks to financial institutions in Asia-Pacific. Over the years he has served as lead audit engagement partner with responsibility for some of the biggest international financial services clients across insurance, commercial, asset management, and both retail and investment banking. He has also spent time in China working with local financial institutions as they reformed and came to the market

“Australia was a big change for me when I first got there but Hong Kong even more so. When I arrived at end of 1989, it was six months after Tiananmen Square so it was an interesting time to be there. Hong Kong was going through a boom period at that point and China was starting to open up economically and so over the next few years there was a huge amount of growth,” he said.

“I don’t think people really appreciated back then how quickly China would open up or how much the economy would grow. The first Chinese company listed in the early 1990s and that was the trigger for many others to follow.

“There were lots of companies in Hong Kong moving factories to southern China, plenty of joint ventures beginning and a number of international companies opening offices in the region so it was a busy time.

“Once the Chinese economy started, you could tell it wouldn’t stop and that the opportunities were immense. In hindsight, I was very fortunate to be in Hong Kong at that particular time to see China open up,” he added.

Having trained originally as an accountant, there was also plenty of scope for Jacob to expand his business knowledge.

“It was a challenging time but also really exciting and I got to do things that I’d never have done in either Australia or Ireland. I was a qualified accountant and an auditor by training.

“When I was in Sydney, I became involved in the banking sector and learnt a lot more when I moved to Hong Kong,” he said.

“It is very satisfying to see some of my clients from 20 years ago grow from very small beginnings to become substantial players. Their success reflects the entrepreneurial nature of Hong Kong and the positive business environment there,” he said.

“Irish people are perceived well here and there’s a long history of Irish involvement here from the early days of Hong Kong being a British colony. There are about 3,000 Irish passport-holders with local identity cards resident here and many Irish people have done well in business here,” he said.

Despite concerns over the Chinese economy, Jacob believes that the region is still an exciting place to be based.

“We’re seeing the impact of the slowdown here already but I’m reasonably confident about China’s ability to manage it,” he said. “The economic situation is still very stable in Hong Kong and, while there are many things I miss about Ireland, this is very much home,” he said.