How to get staff excited about taking a new direction

Put organisational purpose at the heart of your business model 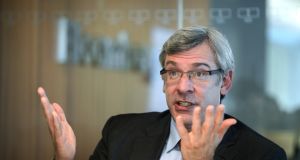 Dave McKay, Royal Bank of Canada: “I want RBC to matter – to our clients, to our people and in our communities – both here in Canada and around the world, wherever we do business.” Photograph: Aaron Harris/Bloomberg

How do you take a successful company – one already highly regarded by employees, customers, and shareholders alike – and reignite people’s passion? How do you energise and galvanise them around a new direction?

That was exactly the challenge that Dave McKay faced when he was appointed president and chief executive of the Royal Bank of Canada in August of 2014. Few would have criticised McKay for staying the course, as RBC was profitable and highly regarded by clients. However, staying the course wasn’t an option for Dave McKay. “I want RBC to matter – to our clients, to our people and in our communities – both here in Canada and around the world, wherever we do business.”

These were the first words McKay said to me in a discussion set up by RBC’s chief human resources officer, Zabeen Hirji. McKay was struck by the simple message of collective ambition: place organisational purpose at the heart of your business model and make sure your vision, strategy, brand and values are all closely linked to it.

Using those principles, RBC ignited the passions of 80,000 people, breathing new life into an already successful company. Here’s how:

1 Connect organisational purpose with individual meaning Agenda setting for a leader is no easy matter. Despite these temptations to be pulled in a variety of directions, McKay focused like a laser beam on bringing RBC together through the power of finding its core purpose.

McKay reasoned that by articulating why RBC existed as an organisation, the process itself would bind the organisation together and enable bold and decisive action.

2 Embrace leadership as a collective accountability Shaping RBC’s “Collective Ambition” was a remarkable effort. Hirji, one of the company’s top leaders, played a key role in gathering input and building momentum among her colleagues.

McKay created a group comprised of key business and functional executives who were opinion leaders and important culture carriers. This group acted as a sounding board, and as early advocates and mobilisers.

3 Find your collective voice Launching a process that would invite input and criticism from every member of the company in an open and real-time format set more than a few nerves on edge. But that’s exactly what the Vision and Values Jam was all about.

RBC’s Jam was held over 55 consecutive hours with Dave McKay and the company’s leaders asking questions, giving opinions, reacting to posts and fielding responses to unfiltered commentary on RBC’s purpose, vision, values and desired leader behaviours. More than 20,000 people weighed in from 22 countries, posting more than 17,000 threads, comments and replies.

4 Unleash new energy Organisations are teeming with the potential to do great things, to go beyond what’s expected and to become game-changers. Yet so few do. As a result of thousands of conversations, dozens of interviews and focus group sessions, the company crafted a powerful purpose statement: Helping clients thrive and communities prosper. This purpose statement strikes at the heart of who RBC is as an organisation and who RBCers are as employees. – Copyright Harvard Business Review 2015. Douglas A Ready is a senior lecturer at MIT’s Sloan School of Management and the founder and president of ICEDR.