When did everyone in tech start believing in unicorns 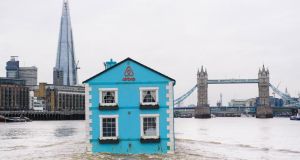 An airbnb floating house in London: the tech start-up is considered a unicorn as it has reached a €1 billion or more valuation. Photograph: Mikael Buck/airbnb/PA Wire

Silicon Valley has experienced a sharp increase in the number of unicorn sightings in recent months. Not since the late 1990s have so many claimed to bear witness to the mystical animals roaming around.

We all know what happened to many of them back in the 1990s. But evolution has a beautiful way of thriving in even the harshest of environments. So perhaps this new breed will be made of stronger stuff.

A unicorn refers to a tech start-up that has reached a €1 billion or more valuation, sale or flotation. People are both excited and terrified of unicorns because very often they lack significant market share, clear revenue streams, or even customer growth projections.

But what they lack in Business Studies 101 fundamentals, they make up for in originality. Unicorns don’t need to pander to a market because they define their market.

The term was originally coined by Cowboy Ventures founder Aileen Lee in 2013.

According to one report, around 40 of the previous decade’s VC-backed US software start-ups had a $1 billion or more valuation mark. In 2015, that number has doubled.

Examples include the likes of Spotify, Air BnB and Uber (which is technically speaking a “decacorn” because of its $10 billion plus valuation).

“Unicorns like Uber and Air BnB are deciding how the market works, and not necessarily by design. They’re figuring it out as they go along.”

“Technology is advancing very quickly right now and the barrier to entry for entrepreneurial teams to build and launch a minimum viable product continues to come down,” explains Cian O’Cuilleanain, Co Founder of Gravity Workspace in Dublin.

Of course, the $1 billion mark is an arbitrary figure. If a company is valued at $950 million for example, it still has as much of a chance of success as any so called unicorn.

But there is a perception that once a start up reaches unicorn status it has entered a different realm.

“What’s different about most unicorns is their philosophy and expectation of outcome,” says O’Brien. “They’re not in it to get acquired or file $10 million in revenue a year. They’re in it to just keep going and get bigger and change everything.”

There is also a wider issue here. How these tech start-ups are acquiring unicorn status could indicate a further narrowing of the investment sector.

“In the old days promising companies came to the market early to get cash but now they don’t have to do that,” explains Professor of Marketing and Associate Dean at UCD Michael Smurfit Graduate Business School, Damien McLoughlin.

“You have VCs and other very wealthy individuals investing heavily in these firms early, giving them unicorn status quickly. Wealthy private investors are basically hoovering up new investment opportunities. All of a sudden firms, that might only be a couple of years old, are ready to make decisions on flotation.”

While unicorn sightings have been reported in China, India, Sweden and elsewhere, the vast majority can be found on the east and west coasts of the USA.

Some believe Dublin-based chip manufacturer, Movidius might be Ireland’s first unicorn, but they still have a long way to go.

“It’s a great aspiration, but we don’t have enough ambition in Ireland,” says McLoughlin. “Too many Irish entrepreneurs are selling their businesses when they’re worth $150 million and good luck to them.

“It’s to do with the whole eco system, and the ability to raise capital. Boston has a triangle of great universities, and lots of smart people with plenty of money.”

“It is the combination of exuberance, incubation and collisions, coupled with young people making lots of mistakes and trying new stuff,” says O’Brien. “Silicon Valley is like one big incubator.”

Professor McLoughlin believes such an environment could be fostered in Ireland. “There’s no actual advantage created by being in Silicon Valley as long as you have the talent, ambition and infrastructure elsewhere,” he says. “We have all of those things here. What we lack is a culture of accepting risk as well as the availability of capital.”