Uber driving competition to the wall like all disruptions 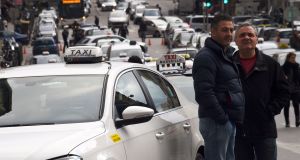 Taxi drivers stand next to their cabs lined up at Castellane Square during a protest against private hire services in Marseille, southern France, on January 28, 2016. Taxi drivers are angry at competition from taxi app company Uber. Photograph: Christine Poujoulat/AFP/Getty Images

Imagine,” said the London cabbie, “that Uber had been operating for 20 years. And I came along with my black cab. My product was less comfortable, you had to go out into the street to hail it and it cost twice as much. I don’t think I’d get many takers. My business is finished, guv,” he said. “I’m thinking about what job I do next.”

This is a true story but an unusual one. Black-cab drivers, industry incumbents, are more often to be found insulting the ethnic origins of Uber drivers and the US corporations that have invested in the service. And Transport for London (TfL), which oversees the city’s transport system, responded to the cabbies’ concern with the customer-friendly suggestion that Uber users should have to wait at least five minutes for their car to arrive. Riot police confronted licensed taxi drivers protesting against Uber in Paris last week.

None of this is new. A series of murals in Manchester town hall celebrates the triumph of economic progress in the 19th century: the substitution of machinery for the skilled artisan. One mural depicts my 18th century namesake, John Kay, creator of the flying shuttle. He is wrapped in a bale of cloth to escape detection as angry weavers demolish his invention. The events it depicts are apocryphal; the truth is, if anything, worse. Kay fled not from workers fearing the end of their livelihoods but from his creditors; his savings had been exhausted in lawsuits over patents. Then as now, patents rewarded lawyers rather than inventors.

The mural probably confuses Kay’s tormentors with the Luddites, who decades later did attempt to destroy the machinery that put them out of work. But they were sternly repressed: parliament allowed the use of military force and capital punishment to suppress the revolt of the handloom weavers.

These technological changes, even if inevitable, create hardship for individuals. Lord Byron, the poet, made an eloquent speech in parliament in support of the Luddites, motivated by concern for men thrown out of skilled work with no other means of employment. Two centuries later, the cost of a medallion required to drive a New York taxi has fallen from more than $1 million in 2014 to $650,000. My cabbie’s investment in the Knowledge, the in-depth familiarity with London streets required of all black-cab drivers, has been outdated by satnav. One might have less sympathy for investors in media companies who find the value of their properties depreciated. Nor need we shed tears for Gene Freidman, the largest owner of New York taxi medallions, or the banks who financed his investment. They chose a speculation, not a career.

The French government granted Kay a life pension and made his flying shuttle freely available. A similar French plan resulted in daguerreotype photography sweeping the world; the alternative by Englishman Henry Fox Talbot, though probably superior, gained only slow acceptance.

Stimulating innovation may require public intervention to make new productsfreely available and to compensate individual losers. But to restrict competition is to damage both the process of innovation and the public interest. – (The Financial Times Limited 2016)