Tyndall’s got talent, and its new CSO plans to develop it 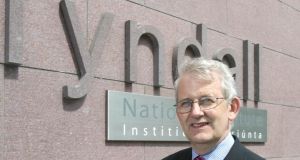 Prof Eoin O’Reilly, newly appointed chief scientific officer at the Tyndall Institute, in Cork: “What I’m particularly excited about, however, is having a part to play in developing new talent.” Photograph: Michael Mac Sweeney/Provision

There is perhaps nothing more satisfying (or frustrating) for a scientist than to see a once widely disputed theory they developed eventually become the norm in their field. It happens only to a select few, one of whom is Prof Eoin O’Reilly, the newly appointed chief scientific officer at the Tyndall Institute, in Cork.

His main research areas include photonics and computational modelling. In the 1980s, he and four colleagues challenged the widely accepted view that semiconductor lasers should be strain free. They argued there were scientific advantages to putting thin-layer structures into a semiconductor laser. At the time, manufacturers did not share their view, having spent the previous 20 years actively trying to get strains out of their lasers to make them more efficient.

In the early 1990s, however, a few companies took their advice and found adding strains made for better devices. Now almost every laser contains a strained layer to make it more efficient. Their research went from being discounted to ubiquitous in a couple of decades.

This year, O’Reilly was awarded the prestigious Rank Prize for Optoelectronics.

“It’s work that we pioneered 25 years ago, but for which I only recently got recognition,” he says. “It’s a good example of how fundamental research can take time to make an impact.”

This is important to both O’Reilly and to the Tyndall Institute more generally. While commercial applications are never far from the minds of the institute’s researchers, engineers and students, they still have an appreciation for the free-flowing research agenda that won’t necessarily lead to immediate commercial patenting and IP opportunities.

O’Reilly has been at Tyndall for the past 14 years, but he didn’t spend his entire career in Ireland. Upon receiving first-class honours in theoretical physics with a gold medal and the Fitzgerald Medal for Physics at Trinity College, he went on to do his PhD at Cavendish Laboratory, Cambridge, in theory of condensed matter.

His aforementioned breakthrough research on strained lasers was largely conducted at the University of Surrey, where he became deputy leader of its Optoelectronic Devices and Materials Group and head of its department of physics.

He has also taught and undertaken research at DCU, Fraunhofer IAF and the University of Illinois, and has clocked up more than 300 publications, including 10 book chapters, nine invited reviews and an undergraduate text book.

His overall h-index (a measurement of both the productivity and impact of the published work of a scientist or scholar) is 42. The top 25 per cent of professors have a h-index of 30.

No one could refute his credentials for the job. But what can he bring to the table as chief scientific officer? “Obviously in my new role I will have increased input into research priorities here, but Tyndall already has fairly well-established priorities – from the fundamental to the very applied.

“I will maintain research in my own areas of photonics and computational modelling and optoelectronics. There is already a very strong body of work in photonics here. But we hope to develop new areas, particularly around internet and telecom applications. The medical-devices industry is another area we hope to get more involved with.

LED research is also high on the agenda. “White LEDs, at their optimum, have an efficiency rate of about 20 per cent,” he says. “But LEDs don’t work at equally efficient wavelengths – they work in near UV. With more efficiency in a wider spectrum, they have a lot of interesting potential.”

His colleague Prof Peter Parbrook has received funding from the European Space Agency to develop LEDs to work in the deep UV spectrum, to replace mercury lamps that are currently used by satellites. “The existing lamps being used are very bulky and unreliable,” says O’Reilly.

The institute’s 2013 annual report was published last week. “What’s impressive is actually the breadth of the achievements,” he says.

“On the one hand you have people being recognised for relatively fundamental research, such as Brian Corbett, who won the 2013 Intel Outstanding Researcher Award for his work in developing photonics for applications in semiconductor technology [making Tyndall a world leader in the number of Outstanding Researcher Awards received, having won three of the 11 given thus far].

“Equally, in 2013, we were specifically recognised by companies – like Hittite Microwave and Qualcomm – who are establishing in Ireland, and who both stated part of what attracted them to Cork was having the Tyndall Institute nearby.”

After just 10 years in existence, the institute has been successful in part because of its focus on niche research areas within ICT coupled with “in-house” knowledge of how to drive research to market. “With so much existing industry collaboration, the commercialisation of research output from Tyndall has become a two-way process,” says O’Reilly.

“We have great collaborators on the pilot side. So a medical-device company, for example, can come to us and ask if they can use optical devices to see things in a specific area they can’t see currently.

“Likewise, we can go to them and say, ‘We think you might like this research.’ I hope to strengthen this process.

“What I’m particularly excited about, however, is having a part to play in developing new talent. We have a very good cohort of early-stage researchers coming in all the time, and part of my new role is to help develop that talent.”