Walsh arrives in Dublin to push through Aer Lingus deal 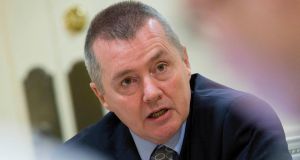 Willie Walsh: faces questions by the Oireachtas Joint Committee on Transport and Communications

Mr Walsh is meeting senior civil servants charged with reviewing IAG’s €2.55-a-share indicative offer for the airline on Wednesday, while he faces a grilling by the Oireachtas Joint Committee on Transport and Communications on Thursday.

The meetings follow claims the coalition is unwilling to sell the State’s 25.1 per cent share in Aer Lingus. This could derail a deal as any formal offer IAG is likely to make is tied to getting the Government’s acceptance.

Despite the Government’s reported misgivings, the State-owned manager of Dublin and Cork airports believes the proposed takeover could be positive and would be unlikely to threaten Aer Lingus’s ownership of valuable rights at Heathrow.

Pádraig Ó Ríordáin, chairman designate of Dublin Airport Authority, which is responsible for both airports, told the same committee Mr Walsh is due to face there appears to be “some potential positives” for Dublin should IAG’s bid succeed.

“If a takeover were to go ahead, management at Cork Airport would work, not just to maintain the existing services offered by Aer Lingus at Cork, but would also examine the potential for new services from IAG’s key airline subsidiaries and its membership of the Oneworld alliance,” he added.

He suggested IAG would be unlikely to divert Aer Lingus’s Heathrow slots from servicing routes to the Republic, as opponents of a sale claim. “Those routes should be sustainable on their own terms as they are very profitable and they also feed a lot of traffic into IAG’s network,” he said.

The slot pairs, as landing and take-off rights at airports are known, are seen as critical to the Republic’s connections to markets for tourism and investment.

Last year, 2.3 million passengers travelled between the three State-owned airports and Heathrow. An estimated 750,000 were transferring to and from other international flights. Business groups in Cork and Shannon have warned multinationals in their areas say they are a key element in bringing in investment.

The group is offering to give the Government and Dublin, Cork and Shannon chambers of commerce a legally binding veto over the sale of the slots, while it is also prepared to guarantee they will continue to be used for Irish routes for five years.

It is understood IAG, owner of Spanish carriers Iberia and Vueling and British Airways, is willing to offer further safeguards in an effort to quell the political opposition to a deal.

Aer Lingus’s 23 slot pairs at Heathrow could be worth up to €1.2 billion on the basis of a deal done by Scandinavian airline, SAS, which sold one pair to a unnamed rival for $60 million.

However, IAG said any such valuation was irrelevant as it does not intend selling any of Aer Lingus’s slots.

Mr Walsh is likely to face a hostile reception from at least some members of the transport committee, as a number are vocal opponents of a sale.

1 If international visitors are pariahs should we not be testing them on arrival?
2 ‘My rent here is so low it’s a joke’
3 WeWork on track for profits and positive cash flow in 2021, says chairman
4 Can Grafton Street stop the flood of closures?
5 Belgium helps Ireland to a Brexit boon
6 Varadkar to meet banks in row over interest on mortgage payment breaks
7 New Powerscourt Springs hotel to open in defiance of virus gloom
8 How to save money while helping to save the planet
9 This charming man: how Paschal Donohoe won the Eurogroup presidency
10 Pharmaceutical industry signals it won’t extend drugs agreement
Real news has value SUBSCRIBE