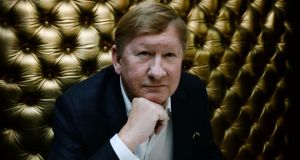 Chicago-based Madison Dearborn Partners has secured agreement with Powerflute, founded by Dermot Smurfit over a decade ago, to proceed with a £268 million (€315.25 million) takeover offer for the company.

It only marked a slight improvement on a failed £261.5 million bid for the paper firm late last year. But, crucially, the bid has now won the backing of some major shareholders this time – a month after Powerflute highlighted challenging market conditions, particularly for its packaging papers business, where profits dropped in the first half.

“Our results were broadly in line [with expectations] but we were facing some headwinds and people sort of took that as maybe a decent time to get out,” Mr Smurfit told The Irish Times on Thursday.

This time, Madison Dearborn secured an undertaking from the company’s main shareholder, Henderson Global Investors, including its Alphagen hedge fund unit, to sell its total 16.7 per cent stake. It also agreed to acquire 81.7 million Powerflute shares and options from the Smurfit brothers, equivalent to a 27.5 per cent holding, for 80 pence each.

However, the offer to remaining shareholders has been set at 90 pence.

“My brother and I always recognised the reality that if we wanted to sell our stake, we’d always have to sell at a discount to the market,” said Mr Smurfit (71).

Documents published by Powerflute on Thursday reveal that discussions on a deal, terminated in December, resumed in April between Madison Dearborn and Powerflute’s independent directors.

Mr Smurfit defended the company’s decision not to disclose the revived talks until an agreement was reached.

“We had no reason to make a disclosure. We only have a responsibility to make a statement as and when we have a strong belief that a deal is going to happen,” he said. “There’s a huge difference between talks [and an agreement].”

Within the 27.5 per cent share controlled by the Smurfits, Dermot owns about 15 per cent, with the remainder owned by Michael.

All told, Madison Dearborn has secured irrevocable undertakings by holders of 51 per cent of Powerflute shares, which are listed on the London Stock Exchange’s junior AIM market, to accept the offer.

The bid was set at a 22 per cent premium above the price at which the shares closed on Wednesday evening, 14 hours before the announcement was made.

Shares in Powerflute surged 20.7 per cent to 89 pence on Thursday.

Madison Dearborn has a long history with the Smurfits, having taken over the Jefferson Smurfit empire the brothers built in 2002 in a €3.7 billion deal.

The group merged with Dutch group Kappa Packaging three years later to form Smurfit Kappa, before floating on the stock market for a second time in 2007.

Powerflute was formed when Dermot Smurfit, former deputy chairman of Jefferson Smurfit, led a takeover in 2005 of Savon Sellu, a then-distressed Finnish paper mill, and renamed it.

He will step down as chairman on completion of the deal, while chief executive Marco Casiraghi and chief financial office David Walton will remain with the group.