Ryanair traffic climbs in May to 10.6m passengers 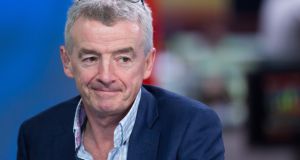 Passenger numbers at Ryanair continued to rise in May as the company carried 10.6 million customers during the month.

That was a 12 per cent rise compared to May last year, and pushed its rolling annual traffic to 108.5 million customers, an increase of 16 per cent.

Load factor, a measure of full aircraft are, increased by 2 percentage points year on year to 94 per cent.

The company is currently in its third year of its “Always getting better” customer service programme that has seen it cut fees, introduce business travel packages and loosen restrictions on hand luggage for travellers.

One of its most recent changes has been a reduction on checked bag fees, with passengers on domestic flights under two hours seeing the fees fall by 50 per cent.

1 Should my mam wait for house prices to drop before buying?
2 Cheers: Conor McGregor's whiskey races up the sales chart
3 US ‘hard seltzer’ drink White Claw launches in Ireland
4 Joint accounts: if one of us dies, can the other access the money?
5 Two prominent business leaders in planning row with neighbour
6 ‘I have a talent for justifying purchases’
7 ‘The recovery needs to be a full-scale economic renewal’
8 EU promises billions to help companies weather the impact of Covid-19
9 Global stocks climb near three-month highs as rebound hopes grow
10 How to . . . move (almost) everything to your new phone
Real news has value SUBSCRIBE