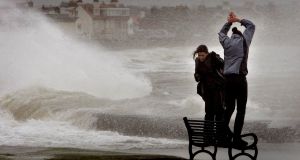 Two girls stand on a bench as they brave waves at Troon promenade in Scotland Photograph: Reuters

P&O Ferries is to close its “loss-making” Larne to Troon route immediately but there will be no redundancies.

The ferry company has also reaffirmed its commitment to its Larne-Cairnryan route services “throughout 2016 and into the future.” The Larne-Cairnryan service is set to operate up to seven sailings each way, every day of the year.

P&O said its Larne to Troon service, which it had operated as a seasonal route since 2003, had continued to make losses and the income from ticket sales had not been enough to cover the annual vessel and port operating costs.

Last year the ferry company reduced services on the route in the off-peak months but said this had failed to make any significant impact on operating costs.

According to P&O it had also been in negotiations with a number of other organisations to secure another solution for the service - such as a lower cost chartered fast-craft on the route - but they had not proved fruitful.