Overseas tourists raise spending by 16% in first half of 2015 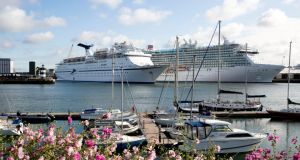 Cruise ships in Dublin Port in summer 2015. The number of trips by people coming to Ireland to holiday rose by 20 per cent in the first six months of 2015. File photograph: Johnny Bambury/Fennell Photography

Revenue from overseas visitors has increased 16 per cent for the first half of 2015 compared to same time last year, according to the latest figures from the Central Statistic office (CSO).

The number of trips by people coming to Ireland to holiday rose by 20 per cent for the same period.

“Overseas earnings continue to increase in tandem with visitor numbers, which have been on an upward curve for over four years,” he said.

The CSO figures showed spending from overseas visitors, excluding fares, rose by €253 million during the first six months of this year.

The biggest increase of spending came from visitors travelling from North America, at 34 per cent. Next was mainland Europe, up 15 per cent, and Britain, up 8 per cent.

Overall, the number of overseas visitors coming for business or personal reasons increased by 378,000, which is 12 per cent extra from the same period last year.

“We are determined to ensure that tourism growth continues,” he said.

“The period September to December usually yields as much as 30 per cent of our annual overseas tourism business.”

“We need tourism growth to be evergreen and not cyclical. While we cannot influence currency rates or the global economy, we must continue to focus on those factors within our control,” he said.

“For tourism businesses, that means that they must remain competitive and continue to provide value for money to visitors in order to sustain the fantastic tourism growth we are witnessing today.”