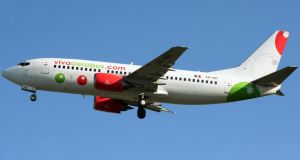 Declan Ryan, the son of Ryanair founder Tony Ryan, attributed the success of the low-cost Mexican airline VivaAerobus backed by his family to their partners in the venture, Mexican bus company Iamsa.

Mr Ryan described the company, which carries 300 million passengers on 10,000 buses a year, as the “perfect partner” for VivaAerobus, in which the family’s Irelandia investment vehicle is a shareholder.

VivaAerobus has just ordered 52 Airbus aircraft from the European company in the biggest ever order of aircraft by a single airline in Latin America. The airline operates 19 Boeing aircraft. “We are up to about four and a half, five million passengers a year. The new aircraft will make a big difference,” Mr Ryan said, in a rare public comment.

The aviation entrepreneur was speaking at a reception hosted by Irish ambassador to Mexico Sonya Hyland for the visit of President Michael D Higgins to Mexico on his visit to Latin America.

Record-breaking deal
Mr Ryan and Airbus North America chief executive Barry Eccleston signed the agreement at a ceremony witnessed by Mr Higgins and Mexican president Enrique Peña Nieto at the National Palace in Mexico City. The record-breaking deal, worth $5.2 billion (€3.8 billion), will transform the Mexican airline and help it to expand into new markets. The company has already started routes in Colombia. “That is going very well. We are there a year,” said Mr Ryan.

Before they set up VivaAerobus up in 2006, the Ryan family had looked at the Mexican market and seen that just 4 per cent of the Mexican population travel by plane.

“We couldn’t understand why [low-cost airline] Southwest in the States had never been into Mexico so we thought there was an opportunity. It took us a year to find Iamsa,” he said.

One ticket
The tie-up with the bus company has increased passenger numbers as one-third of all flights have bus journeys at each end, which can be taken on the same ticket, said Mr Ryan. “It has gone phenomenally well.”The Mexican market is booming, he said, describing it as “very good place to do business” and the people as “very hard working”.

Dr Philip Matthews, president of the National College of Ireland, described Mexico as a very new market for university partnerships. So the college was “breaking new ground and getting there early” by signing an agreement with ITESO, the Jesuit College of Guadalajara. “We have found the Mexicans very open, as we are, and very keen to develop collaborations,” he said.

Dublin City University agreed a partnership with Tec de Monterrey, a university with more than 25 campuses and 90,000 students in Mexico, to develop educational programmes around water as a global resource, student entrepreneurship and family business.

Prof Brian MacCraith, president of DCU, said the university could double or triple the 50 exchange students from Mexico it takes every year.