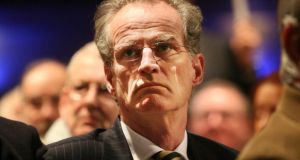 The latest accounts for Omega Air Services, the group owned by Ulick (above) and Desmond McEvaddy, include a prior-year adjustment for 2011 which converts that year’s after-tax profit of €660,029 to a loss of €170,794. Photograph: Matt Kavanagh

The brothers say the latest accounts have been prepared on a going-concern basis as the position of the loss-making subsidiaries associated with their Naas Primary Care Campus in Co Kildare improved in 2013.

They say the trading performance of their aircraft repair and maintenance business has been “exceptionally positive” but that the subsidiaries associated with the Naas centre incurred combined losses of €2.25 million.

The brothers, and Athy-based property developer Gerry Roche, were behind the €25 million Vista Primary Care Campus project, which opened in 2008. The project was originally envisaged as including a private hospital but that part of the plan did not progress.