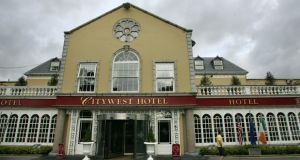 Citywest Hotel in Dublin which was purchased out of receivership.

Two companies linked to Brehon Capital’s €29 million purchase out of receivership of the Citywest hotel yesterday obtained court permission to serve legal papers on businessman Jim Mansfield jnr by post, because they are unable to reach him at home.

Mr Mansfield jnr is the son of the late developer Jim Mansfield, who built Citywest before it was seized in 2010 by a bank receiver.

Brehon’s lawyers told the court yesterday that a gate that opens out on the busy N7 dual carriageway had been locked by the new owners, but that the locks had recently been cut.

The companies also alleged that a wall into an area of the hotel’s property, “compound 11”, had been knocked down under the supervision of Mr O’Gorman, and “diggers and rubble” had been moved on to the land.

Mr O’Gorman gave an undertaking yesterday that he would not interfere with the hotel’s property before the hearing of the injunction application, which was adjourned until October 20th.

He also complained to Judge Marie Baker that his legal papers had been “served on my mother-in-law and my 14-year-old daughter”.

He said that he “acts on behalf of a client who disputes ownership of the land”, although he did not name his client to the court.