Aircraft finance specialist to manage and service transaction through subsidiary 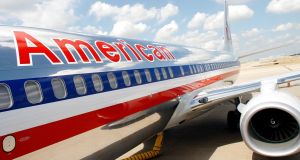 The 35 aircraft Apollo Aviation is securitising are leased to carriers such as American Airlines, Virgin and Viva Aerobús. Photograph: Mike Fuentes/Bloomberg

Irish-based aircraft finance specialist Apollo Aviation will realise $640 million from the securitisation of 35 aircraft leased to carriers such as American Airlines, Virgin and Viva Aerobús.

The aircraft lessor, with offices in Dublin, Miami and Singapore, is establishing Apollo Aviation Securitisation Equity Trust 2016-2, which will borrow $640 million to buy 35 craft from the company and a number of third parties.

It will borrow the cash in a series of tranches and secure it against the aircraft, which will remain on lease to their airlines. The company will manage and service the transaction through a subsidiary, Apollo Aviation Management.

Aircraft lessors frequently securitise their craft by transferring them to special-purpose vehicles that raise the money to buy the aircraft from the capital markets. The exercise allows lessors to cash in on their assets.

Apollo’s latest deal is the second securitisation that it will have completed this year and the third overall since it was founded in 2002. The craft involved are a mix of Boeing and Airbus manufactured aircraft that are used mainly for short-haul flights.

The carriers to which they are leased include American Airlines, Virgin America, India’s SpiceJet, Air Berlin and Mexico’s Viva Aerobús, the company in which Irish businessman Declan Ryan’s Irlandia Aviation is selling its 49 per cent stake.

Standard & Poors and Kroll are expected to give the loans taken out by the securitisation ratings between A and BBB, implying a low risk of default.

Apollo’s chairman, William Hoffman, said the company was continuing to build on its position as a premier aviation asset manager.