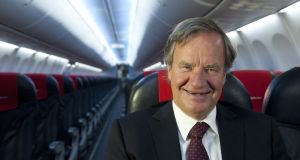 The Irish Aviation Authority (IAA) says claims by US pilots’ unions that a Dublin-based airline’s work practices could compromise safety are “false and highly misleading”.

US unions such as the Southwest Airlines Pilots’ Association (Swapa) claim Norwegian Air International is using its Irish registration as a flag of convenience to hire cheap labour, undermining both employment standards and safety.

However in a submission to Washington’s department of transportation, supporting Norwegian’s application for a permit to fly to the US, the IAA dismisses such claims as false and highly misleading.

The airline is a subsidiary of Norwegian Air Shuttle, which established it in the Republic to benefit from EU-US air transport treaties, as the company plans to offer low- cost transatlantic flights, beginning with services to Boston from Cork and Shannon.

However, opposition from unions and politicians delayed its application for a US foreign carrier’s permit by two years.