Irelandia Aviation expands into Peru with launch of Viva Air 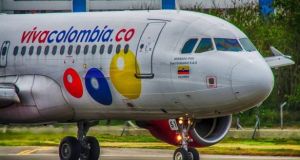 Irelandia Aviation, which already operates in a number of countries in central and South America, is to establish a new airline in Peru

Irelandia Aviation, the low-cost carrier group led by Declan Ryan, son of Ryanair founder Tony Ryan, is to expand operations in South America with the launch of a new airline in Peru.

Viva Air will begin in the first half of 2017, with Airbus A320 aircraft flying several routes including Lima, Cusco, Arequipa, Iquitos, Piura, Tarapoto, Trujillo and Chiclayo.

The move comes in the same week that Irelandia Aviation announced a deal to sell its 49 per cent stake in budget Mexican carrier Viva Aerobus to majority stakeholder IAMSA in order to further focus on expansion in central and South America.

Irelandia’s stake in the carrier is estimated to be worth about $250 million (€226 million), five times its initial investment value.

The group, which is based in Ireland, has a successful track record of investing in low-cost carriers that include Allegiant, Tigerair, Viva Aerobus and Viva Colombia.

“Peru has a rapidly growing economy that is highly suited to our low cost model,” said John Goode, senior partner at Irelandia.

1 Ryanair and Eir the worst for customer service during Covid crisis
2 Irish elearning company LearnUpon closes €47.4 million investment
3 ‘Essential’ retailers risk a firestorm if they exploit the closure of the ‘non-essential’
4 Aldi to impose limits as Christmas toys go on sale
5 Fair deal? Family at odds with hospital and each other not so sure
6 Economists warn that GDP will fall again over Level 5 restrictions
7 What to consider if older person or loved one needs care at home
8 PlanNet21 eyes further acquisitions after buying rival eCom
9 Tinnitus group Neuromod raises €10.5m for expansion
10 Cabinet to agree on implementing EU travel plan
Real news has value SUBSCRIBE