Airline group, which is trying to buy Aer Lingus, expects profit of €2.2bn 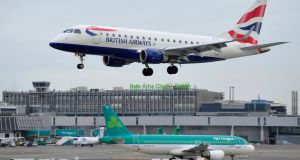 British Airways-owner International Airlines Group upgraded its 2015 profit forecast by more than 20 per cent, after reporting a slightly better than expected 81 per cent jump in profit last year.

IAG, in the process of trying to acquire Aer Lingus, reported 2014 operating profit of€1.390 billion, ahead of a company-supplied consensus forecast of €1.373 billion.

The airline said it now expected operating profit of €2.2 billion in 2015, compared to the €1.8 billion it had said it was targeting, helped by lower fuel costs and as it grows capacity.

The upgrade is the latest in a series from IAG, which raised its 2014 forecast last October, buoyed by its exposure to strong demand for North Atlantic travel and the return of its Spanish arm Iberia to profitability. IAG, which owns low-cost Vueling in Spain as well as British Airways and Iberia, wants to add Aer Lingus to its portfolio but its €1.36 billion approach is yet to get the backing from the Government here, which owns a 25 per cent stake.

Earlier this week, the Government presented IAG with a list of demands over Aer Lingus, including more clarity over job cuts and guarantees over connections between Ireland and London.

The British-based group said it was benefiting from its focus on lowering costs, particularly in its Iberia unit. “The airline’s (Iberia’s) turnaround has been remarkable, both financially and operationally,” chief executive Willie Walsh said in a statement.

1 Johnny Ronan loses out on €315m Dublin docklands deal
2 Bank of Ireland takes €169m charge for 1,700 job cuts
3 How much state pension will I get next year?
4 Ryanair and Aer Lingus to cut further flights from regional airports
5 How long can Government afford to keep State pension age at 66?
6 Liquidators appointed to Irish arm of Wirecard
7 Tesco takes to the skies with home delivery by drone
8 Meath site primed for delivery of enterprise and employment
9 DAA warns of confusion on airport Covid tests
10 Am I crazy to consider switching to an Ulster Bank mortgage?
Real news has value SUBSCRIBE