More than one million people visit Book of Kells annually 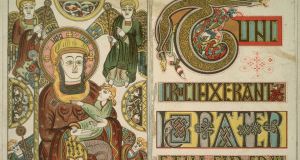 The Book of Kells, whic is on view in Trinity College, Dublin.

A dispute over a contract for management of visitors to Dublin’s Trinity College, including to the Book of Kells, has come before the Commercial Court.

Future Ticketing Ltd (FTL), with offices at Axis Business Park, Tullamore, Co Offaly, disputes how a €620,000 contract for supply of a visitor attracting management system (VAMS) was awarded, following a public procurement process, to Ticketsolve Ltd, with offices at the Digital Hub, Dublin.

FTL initiated proceedings last month against the provost, fellows, foundation scholars, and the other members of the board of the college. The bringing of the case meant the contract award was automatically suspended and that FTL, which has managed visitors to the college and Book of Kells since 2016, continues to do so.

On Monday, Mr Justice David Barniville granted an application by Joe Jeffers , for the college, to admit the case to the fast-track Commercial Court. A hearing date will be fixed later.

The judge was told the Trinity respondents are anxious the dispute is decided as soon as possible for reasons including the busy period for Book of Kells ticket sales is between May and September.

More than one million people visit the Book of Kells annually, Mr Jeffers said. While adopting a neutral stance on the fast-track application, Eileen Barrington SC, for FTL, said it is a small company not anxious to incur additional costs.

Even if fast-tracked, the case was unlikely to be decided before the end of the legal year on July 31st, she believed. The judge said, for reasons including the case has a significant commercial aspect, he would admit it to the Commercial Court list.

While the value of the contract is below the €1m threshold of the Commercial Court, Trinity’s ability to generate revenue from it creates a potential to bring it over €1m, he also noted. FTL tendered early last year for the contract for VAMS but was informed in November 2019 its tender had not been successful.

In an affidavit, FTL CEO Liam Holton said he has been involved in the attractions and events industry for 17 years and was “very surprised” Ticketsolve had been awarded the contract when, “to the best of my knowledge, it has no track record in operating any similar contracts of this nature, size or scale”.

FTL has challenged the conduct of the tender process on several grounds, including how marks were awarded on certain categories. ends