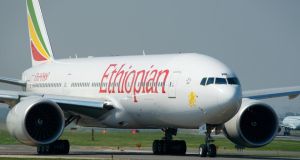 There was a right old Ethiopian hooley up at the Crowne Plaza hotel near Dublin airport last Saturday for the launch of Ethiopian Airlines’s new service from Addis Ababa to Dublin to Los Angeles, using the new Boeing 787 Dreamliner.

Among those sipping Rift Valley Ethiopian wine (who knew?) and lapping up the tunes from Ethiopian-born DJ Sparks were Kevin Toland, the chief executive of the Dublin Airport Authority, Irish Ambassador to the Ethiopian nation Aidan O’Hara and his counterpart, Lela-alem Gebreyohannes Tedla.

The airline was represented at the dinner by chief operating officer Mesfin Tassew. The boss, Tewolde GebreMariam, was in Los Angeles, having transited through Dublin on the inaugural flight early that morning. The Dublin Airport Authority also held a gate launch in the wee hours of Saturday for Ethiopian’s first flight between Dublin and LA.

One aviation wag I spoke to reckons it might be the first route connecting three different continents using the Dreamliner. I also heard some of the Irish at the Crowne Plaza bash tried their feet at Ethiopian dancing. I’d say that was a nightmare.