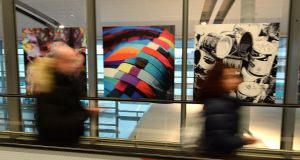 Dublin Airport. Airport operator DAA will seek an easing of flight restrictions attached to a near-decade old planning approval for a new Dublin runway, as it proceeds with plans to complete the €320 million project by 2020. Photograph:Cyril Byrne/The Irish Times

Airport operator DAA will seek an easing of flight restrictions attached to a near-decade old planning approval for a new Dublin runway, as it proceeds with plans to complete the €320 million project by 2020.

DAA chief executive Kevin Toland said that the company aims to apply to planning authorities within 12 months to lift a ban on take-off or landings between 11pm and 7am on the new runway. It will also seek to ease a restriction on all flights at Dublin Airport between the same hours to 65 once the new runway is in operation, he said.

The airport currently deals with 99 night-time flights, while early morning is its busiest time, Mr Toland said, after the company posted a 47 per cent jump in net profit in 2015.

The aim to tweak planning permission, secured from An Bord Pleanála in 2007, is likely to put DAA on a collision course with residents affected by the runway.

Meanwhile, DAA chief financial officer Ray Gray said the company is planning to carry out a “significant” refinancing in the coming years as it seeks to raise funds for a new runway and repay a €550 million bond.

Speaking to reporters yesterday, Mr Gray said DAA “is likely to do a sizeable refinancing in one or more tranches” to help fund the runway and the massive bond repayment in mid-2018.

He declined to say how much debt the company would need to raise to develop the runway, with which the company said last month it would proceed by 2020. DAA ’s net profit rose to €61 million last year from €42 million in 2014 as Dublin passenger numbers hit a record and commercial revenue from its domestic and international businesses rose, the company said in a statement.

Sales at the company increased by 21 per cent to €680 million during the year. Passenger numbers at Dublin Airport reached a record 25 million, marking a 15 per cent increase on the previous year, while numbers at Cork Airport declined 3 per cent to 2.1 million.

In the first four months of this year, Dublin passenger numbers were up 15 per cent at 7.8 million, while Cork recorded an 8 per cent boost, to 592,000 passengers. Total sales at Dublin and Cork airports, including retail, food and beverage sales by concession-holders, increased by 20 per cent to €273 million last year. Profit from the overseas activity of DAA’s ARI, or Aer Rianta International, rose by 19 per cent to €22 million.